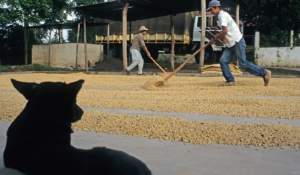 Coffee production plays a significant role in Central America’s economy and continues to be a major export crop in an industry that impacts more than 1.2 million employed workers across the region. An ongoing coffee crisis caused by falling world prices, shifting climates and natural disasters has left many smallholder farmers struggling to turn a profit on their crops, driving many out of Central America for a better chance in the United States. Texas A&M University’s Norman Borlaug Institute is addressing the threats that the coffee industry in Central America faces through the education and training programs of its Center for Coffee Research and Education (CCRE).

CCRE, established in 2016, is a branch of the Norman Borlaug Institute for International Agriculture at Texas A&M University that works to refine global coffee quality and supply through research and capacity building. The Borlaug Institute first got involved in the coffee industry in the 2000s after organizing a project alongside USAID to support women coffee farmers in Rwanda, according to CCRE assistant director Eric Brenner. The Borlaug Institute also assisted in Central America following a 2012 outbreak of a coffee leaf rust disease stemming from the fungus Hemileia vastatrix or “La Roya.”

Preventing coffee leaf rust formed a fundamental goal of CCRE’s Resilient Coffee in Central America project, which lasted from 2018 to 2020. This USAID-sponsored project emerged to research and promote newer crop management methods and train smallholder farmers with climate-resilient agricultural practices. The project took place in Guatemala, Honduras and El Salvador, reaching an estimated 745,000 hectares of land used for coffee production. The leaf rust outbreak most harshly impacted these three countries, affecting about 50% of coffee crop acreage and resulting in more than $1 billion in damages in 2013 alone.

The Resilient Coffee in Central America project directly benefited more than 22,000 smallholder farmers by establishing 104 demonstration plots on farms across the three countries, each showing the capabilities of rust-resistant coffee hybrids and varieties. The demonstration plots also promote better management and processing practices while advocating market diversity by growing different varieties of coffee plants. According to USAID, the project also “promotes new economic opportunities, particularly for women and youth, including plant nursery management, coffee milling, energy generation, marketing, cupping and retail occupations, such as baristas,” thus reducing the need to migrate due to a lack of employment opportunities.

CCRE’s efforts have not gone unnoticed in Central America, but climate-related setbacks are still affecting crop production on coffee farms. In November 2020, Hurricanes Eta and Iota wracked Central America, affecting more than 7.5 million people in the region. The two hurricanes left a wave of intense humidity in their wake, spurring a revival of the leaf rust disease.

Since the COVID-19 pandemic began, coffee exports in Central America have drastically decreased. For example, the 2019/2020 harvest season, which starts in October and ends in September, had a 17% reduction in exports. The region’s coffee recession has significant links to the lasting effects of the hurricanes, the lockdowns caused by COVID-19 and the cyclical nature of the leaf rust breakouts.

In 2020, Honduras, “the region’s largest producer,” stood as one of the worst-affected coffee exporters of Central America. In the first four months of the 2019/2020 harvest season, coffee exports from Honduras reduced by 40%.

CCRE’s latest project, the Honduran Coffee Academy, serves to improve working conditions with employee training programs and coffee research. Located at the Honduran Coffee Institute (IHCAFE) in the capital city Tegucigalpa, the facility offers training and education on topics ranging from coffee genetics, crop management, nursery management, water management and more. Roger Norton, regional director of the Borlaug Institute, believes the project “will contribute to strengthening the livelihoods of coffee farming families and the international competitiveness” of the coffee sector.

The CCRE at the Borlaug Institute continues to support the labor force in the coffee sector by training people on sustainable practices to prevent the disastrous effects of leaf rust diseases. Projects like Resilient Coffee in Central America and the Honduran Coffee Academy help workers in the coffee industry in Central America prepare for the many uncertainties the industry faces.