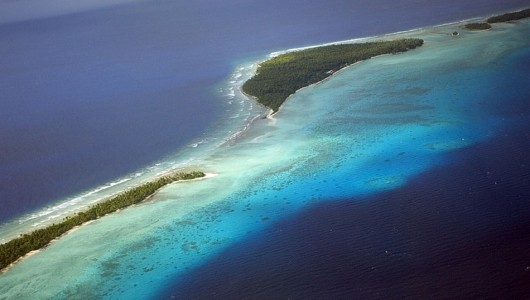 As climate change is debated hotly by the biggest carbon emitters of the world, temperatures increase and ocean levels rise, dramatically impacting the innocent. Although almost unnoticeable on the west coast of the U.S. or the harbors of Shanghai, the very same sea could soon be swallowing acres of farmland on tiny islands across the South Pacific, thus bringing the argument of climate change and food security to the forefront.

The Marshall Islands, a large grouping of 29 atolls located in the South Pacific Ocean, lies about halfway between Hawaii and Australia. Many of the islands only rise above the sea about two meters and are increasingly vulnerable to climate change.

According to The Japan Times, president of the Marshall Islands Christopher Loeak said the Pacific is fighting for its survival and climate change has already arrived.

Recently, the president declared a state of emergency for the Marshall Islands following some of the worst flooding ever experienced in conjunction with a severe drought. A freak tide nearly destroyed Majuro, a large coral atoll of 64 islands, breaching the sea wall and flooding the airport runway. A drought left 6,000 people surviving on less than one liter of water a day.

Many other South Pacific islands are experiencing the same problems. “Microstates,” as they’re called, including the Solomon’s, Tuvalu and the Carteret Islands are experiencing rapid erosion, higher tides, storm surges and inundation of wells with seawater. Kiribati, an island nation in the central Pacific Ocean comprised of 33 atolls and reef islands, is estimated by its president, Anote Tong, to be uninhabitable within the next 30 to 60 years. Its inhabitants from smaller surrounding islands are escaping the invading seawater and migrating to the capital south of Tarawa. The state is even planning the purchase of 2000 hectares in Fiji for farming and a possible place to live.

Although climate change might not be felt yet in some places of the world and those who profit from it work so tirelessly to bury the evidence, the effects are already changing in the islands of the South Pacific, a region of the world emitting only 0.1 percent of the planet’s carbon. The islander’s way of life is being jeopardized, threatening food security and stripping away their basic needs for survival.

In a 2007 report by the Intergovernmental Panel on Climate Change, observations were discussed on temperature rises in the South Pacific. In fact, compared to earlier historical records in the twentieth century, by 2003, it had become 15 percent drier and 0.8 degrees warmer. The ocean surface had risen about 0.4 degrees, altogether contributing to increased El Niño effects and cyclone frequency and intensity.

In the Pacific, about 70 percent of the main agriculture is geographically located to take advantage of the summer rainy season. Agriculture is therefore heavily dependent on seasonal rainfall for production, but rising temperatures and recurrent droughts are wreaking havoc on food supply and costing, on some occasions, more than island countries’ gross domestic products.

Many urban populations in the Pacific are now very much dependent on cheap foreign imports for their daily sustenance. However, according to a study by the University of Copenhagen in 2007, in the Solomon Islands, the majority of rural people still live and depend on subsistence food production and fisheries. A multitude of cultivated plants such as yams, taro sweet potatoes and other crops such as bananas and watermelon are still part of daily life.

In the recent past, El Niño events have devastated the sugarcane industry and killed off livestock totaling millions of dollars. Flooding and strong winds caused by tropical storms have, in the past, affected farming, but in the years to come it’s projected to only get worse. Precipitation variations are possible up to 14 percent on both sides of normal rainfall by the end of the century, according to the IPCC

Climate associated disasters such as tropical cyclones, flash floods and droughts impose serious constraints on development in the islands, so much so that some Pacific island nations seem to be in a constant mode of recovery. Food availability and people’s accessibility to food are among the first to be affected following such disasters.

The islands in the South Pacific are now leading the world by example, pursuing renewable energy for their power needs. They are beginning to substitute costly import-dependent diesel for homegrown coconut biofuel power and outer island communities are being converted to solar power. Tokelau, a territory of New Zealand, has become the first territory to become 100 percent solar-powered. The Cook Islands and Tuvalu are aiming to be all solar powered by 2020.

Someday, possibly in the not so distant future, the world may lose its jewel of the Pacific. The white sandy beaches and the sapphire seas will disappear for good, consumed by rising ocean waters.