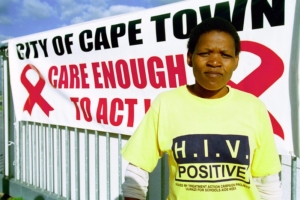 Following apartheid, South Africa became the focal point of the AIDS epidemic. Despite the rapid rise of HIV in South Africa, the governmental response was slow. During the 1980s, people often assumed that the virus spread because of the behaviors of injection drug users and gay men. However, the spread of the disease in Africa looked incredibly different since more than half of the people living with HIV in sub-Saharan Africa were women.

HIV and AIDS in South Africa

When HIV and AIDS started having a widespread impact on South African society and communities, President Thabo Mbeki followed the arguments of Peter Duesberg. Duesberg believed that HIV could not be the cause of AIDS. This was opposed to Western medical approaches to solve the epidemic. Moreover, Tshabalala-Msimang, the Health Minister, advocated for nutritional solutions in 2003.

Other countries tried to help President Mbeki but were unsuccessful in persuading him. Civil society groups raised grave concerns over the need for urgent action. One of the most prominent groups to raise concerns and to have the greatest impact in the region was the Treatment Action Campaign.

Zackie Achmat, along with fellow 10 activists, founded the Treatment Action Campaign (TAC) in 1998. Achmat was a gay rights activist living with HIV. TAC was a tripartite alliance between the AIDS Law Project and COSATU. It was formed as a response to HIV in South Africa. The organization was needed because of the lack of urgency that the government and the medical industry had in responding to the virus.

TAC is a rights-based organization focused on getting those in need access to treatment for HIV/AIDS. TAC is technical and political in its arguments as it utilizes justifications for actions through moral, scientific and economic reasoning. Also, TAC develops partnerships with activist groups such as the Gay Men’s Health Crisis (GMHC) and ACT UP. It aids in training on ‘treatment literacy’ and initiated a more extensive peer education network. In addition, TAC formed partnerships between elites, academics, professionals and press. However, it ultimately served to strengthen the effort for the poor to advocate for themselves. TAC uses its sources for social mobilization, advocacy, legal action and education.

TAC’s first action was to argue for the right to access medical resources, namely antiretrovirals (ARVs). The organization found an inherent fault with the World Trade Organization’s 1995 TRIPS agreement, which legally protected intellectual property and patents.

In 1998, TAC demanded that the South African government introduced a program to prevent mother-to-child HIV transmission (PMTCT). The social movement around advocacy for PMTCT was primarily made up of predominantly poor black women living with HIV. The issue was framed as a moral issue. The pharmaceutical company GlaxoSmithKline (GSK) was profiteering off the sale of the drug. As a result, TAC demanded a price reduction and framed it as a moral issue regarding the South African constitution. The organization succeeded in its demand for legal action.

The essential tools for TAC’s success were its use of legal resources and advocacy. TAC made legal demands of the South African government. It also collaborated with progressive lawyers, scientists and researchers to develop plans and alternative policy proposals. TAC went beyond merely advocating for the poor and based policy on the entitlement of rights. The organization has taken successful litigation measures on many occasions. The past successful cases were supported by the efforts of lawyers and TAC’s actions, which involved marches, media campaigns, legal education and social mobilization.

This was possible due to advocacy and partnerships that TAC formed and developed. The structures in which it functioned also made it possible. Article 27 of the South African Constitution took effect in 1997. It includes the right to access medical services, reproductive healthcare and emergency medical treatment.

A key component that made TAC successful was the context in which it was based. The actions of TAC would not be possible without the tools it employed that were already in place within South African infrastructure and ideology. Additionally, TAC focused on the issues of the affected people. This included economic inequity, women’s rights, post-apartheid race relations and the necessity of medication access. The Treatment Action Campaign met immediate and long-term demands for people affected with HIV by addressing inherent human rights issues. TAC was mostly successful in its response to HIV in South Africa because it mobilized the personal into the political.