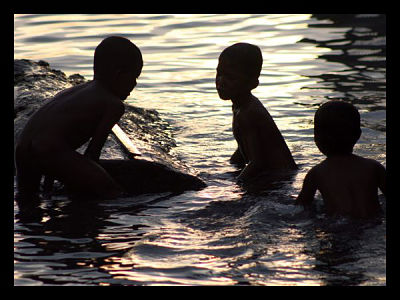 If you think back to your days as a kindergartner, you may remember the first time you learned the water cycle. Equipped with a blue crayon, you replicated what your teacher described in a simple picture: rain falls, people drink it, the water evaporates and the whole thing repeats. You learned that water is renewable.

But renewable does not mean unlimited, a fact constantly recognized by the 780 million people who lack access to clean drinking water.

Freshwater, the largest source of our drinking water, makes up only 2.5 percent of the planet’s water. Only 1 percent of freshwater is actually available, as most of it is frozen. This leaves 0.007 percent of the Earth’s water left for an ever-growing population that exceeds 7 billion. This is a water crisis.

“Why can’t we use ocean water?” one might ask. The answer is, well, we can.

Desalination, the removal of salt from saltwater, makes the use of ocean water possible. But breaking the strong bonds that salt forms with water molecules requires a lot of energy, and this energy is expensive.

As Peter Gleick, president of the environmental think-tank Pacific Institute, says, “It can cost from just under $1 to well over $2 to produce one cubic meter (264 gallons) of desalted water from the ocean.”

Considering that 99 percent of water-related illnesses occur in developing countries, desalination is simply an unrealistic option for most who suffer from the water crisis.

But what if there were some way to desalinate without such steep energy requirements?

A team of scientists believe they know how to do so.

Martin Bazant and Daosheng Deng of the Massachusetts Institute of Technology (MIT) have developed a process that they believe will more efficiently and effectively desalinate water. They call it “shock electrodialysis.”

Today, the two cheapest methods of desalination are reverse osmosis and electrodialysis.

Reverse osmosis works by pumping water through a membrane that does not allow salts to pass. Although it requires less energy than older methods, it works too slowly.

Building on reverse osmosis, electrodialysis tried the opposite: pumping salts through an electrified membrane until only pure water is left. This process is significantly cheaper than reverse osmosis but is not without shortcomings. It fails to decontaminate water of dirt and bacteria without additional filtration methods.

Bazant and Deng say that shock electrodialysis can produce clean, bacteria-free drinking water in one step. How? They placed an additional filter made of porous glass near the electrified membrane. Based on Bazant and Deng’s observations, dirt particles and bacteria are unable to fit through the tiny pores in the glass material.

If it turns out that this MIT development can be produced at a low cost on a large scale, shock electrodialysis could provide millions of people with access to drinking water.