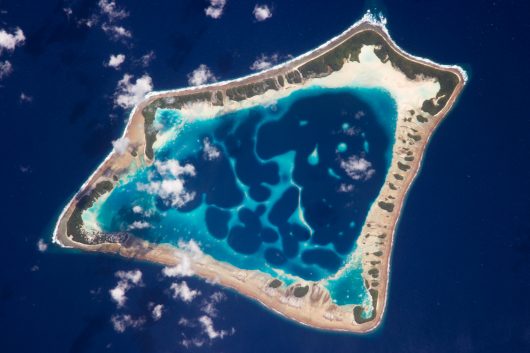 Despite being predominantly known as a lower-middle-income nation, Tokelau still has higher incomes than any other Polynesian country. However, the causes of poverty in Tokelau have impacted the standard of life on the island. These causes include extreme isolation, limited natural resources, depopulation and the island’s proneness to natural disasters.

Tokelau is a Polynesian state composed of three atolls: Atafu, Nukunonu, and Fakaofo, located about halfway between Hawaii and New Zealand in the Central Pacific Ocean. Tokelau is known to be politically associated with New Zealand. What this means is that Tokelau heavily depends on New Zealand to receive aid and remittances. According to Oxfam International, the island constitutes the smallest economy of any country in the world. This extreme isolation from the rest of the world is one of the causes of poverty in Tokelau.

Oxfam International showed that Tokelau has only one ship visiting three times a month and no air transportations. This leads to a cutback of resources entering the country, which restricts economic development and restrains the population to subsistence-based agriculture. The island’s main food sources are fish and coconut. Other cultivated food crops include bananas, breadfruit, pandanus and papaya. The island is subsidized with imported goods such as rice, flour and sugar. Without New Zealand’s assistance, this isolation and lack of natural resources would make the island almost unable to be self-sufficient.

Depopulation is also one of the causes of poverty in Tokelau. Because of its size, the islands have a restricted human development capacity and suffer from heavy emigration.

The third factor causing poverty in Tokelau is its vulnerability to damage from natural disasters. Climate change is a major issue across the island that threatens human existence and environmental preservation. Due to the island’s small landmass surrounded by ocean, rising sea levels constitute a threat to inhabitants. However, policies have been put in place to address this, such as making Tokelau the first country to derive 100% of its energy needs on renewables.

Despite Tokelau’s subsistence lifestyle and fragile environment, the island’s inhabitants maintain social cohesion and a strong communal culture that keeps the economy stable.