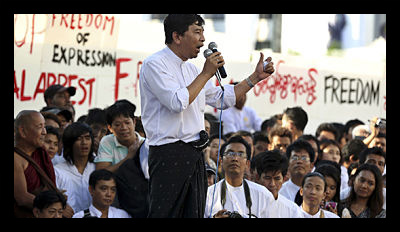 The freedom of the press in Burma has recently come under siege from its government. On July 10, four journalists and their bosses were handed ten-year sentences with hard labour for violating the State Secrets Act by reporting on a government chemical weapons facility.

Not only is the law archaic — dating back to the when Burma was still a British colony — but the verdict also contradicts the much more recent Press Law which guarantees that journalists won’t receive prison sentences for their work.

Their imprisonment has garnered international and local condemnation. Amnesty International responded to the situation saying that the verdict represented “a very dark day for freedom of expression” in Burma. The statement went on to say that the organization “considers all five men to be prisoners of conscience and calls for their immediate and unconditional release.”

Likewise, local opposition leader Aung San Suu Kyi spoke out against the journalists’ imprisonment. She recognized that national security should be an important concern for Burma, “but in a democratic system, security should be in balance with freedom.”

This suggests that even if the journalists were guilty of trespassing onto a Burmese military facility, the sentence would still be disproportionate to the crime. However, the reporters have publicly denied the allegations in court, bringing into question whether they even committed the crime. Given Myanmar’s track record with the press, it would not be out of the question for the Burmese government to lash out at journalists for being critical, even if no crimes were committed.

For instance, several days after the ten-year verdict was given, a group of several dozen journalists were prevented from covering a public event for wearing shirts that read “Stop Killing Press.”

The reporters were escorted away from the Myanmar Peace Center where the event was being held. From there, the journalists held a spontaneous silent protest. The demonstration was peaceful and unobtrusive, yet a group of nearly 50 journalists were arrested and await trial for participating in the protest.

The arrests were particularly concerning since fewer than 50 people were involved in the demonstration. This means that journalists who simply covered the protest or were loosely connected to it are also facing the prospect of jail time.

While their potential prison time is not particularly hefty — six months being the maximum — the mere fact that they were arrested and face criminal charges for a peaceful protest is an appalling transgression against the freedom of the press in Burma.

According to their lawyer, “They didn’t shout slogans. They held no placards. They just stood on the pavement like any other people. I see no point in taking action against them.” Some of the participants put black tape over their mouths, but other than that, no action was taken during the protest.

But now, given the dire condition of press in Burma, more drastic action may become necessary. While local journalists and human rights watchdogs are sure to clash with the Burmese government over these arbitrary arrests, we may soon see more international actors playing a larger role to ensure that Burma finally enjoys the free press that has eluded the country for so long.