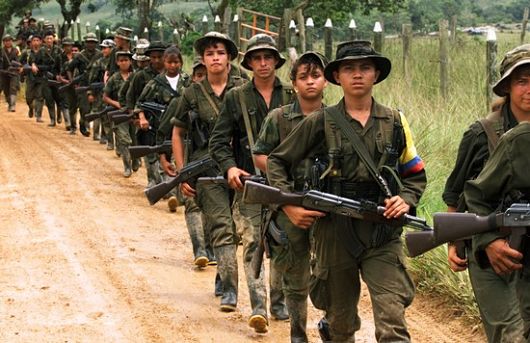 Colombia is known to have one of the biggest illegal drug industries in the entire world, grossing around $10 billion every year. This huge sum is largely due to the existence of a rebel army called the Fuerzas Armadas Revolucionarias de Colombia (FARC), which is a guerilla group that has combated the government of Columbia for decades.

The FARC thrives off of the lower class, a group of individuals that have become enraged with the injustices being committed against them every day. While much of their money comes from ransoms, a large portion of it is also drawn from drug trade.

Since Columbia is a more tropical climate, farmers who are mostly lower class citizens, can easily grow cocaine between their crop rows without it being noticed by officials. This cocaine is then purified and packaged and sent through airports by drug mules who often do not get caught due to ingenious methods of hiding. But this is beginning to come apart.

Airport security is at an all-time high in Columbia, leading drug traffickers to become more ingenious with their methods. One example of this was using a mule posing as a hiker and filling his rope with liquid cocaine. Airport security is onto such tricks and has been able to cut down the amount of cocaine that is being trafficked. A shift in management is also called for as many officials could have connections with illegal groups such as the FARC. There has been a long standing war between the FARC and the government and it does not look like it will be ending anytime soon. However, there is a glimmer of hope in the blanket of darkness that envelops this country.

The long years of struggle between the FARC and the government has come to a standstill as government officials begin to accept their fates as prisoners in their own nation, but various NGOs have begun to step in to make a difference. NGOs have taken up the job of accounting for dead or lost individuals, monitoring violence, investigating links between the FARC and government officials, providing aid to individuals who have been displaces due to violence and providing education to those who search for it.

This education will eventually become key to decreasing the overall transactions of illegal drugs in Columbia. By providing education for the young children, NGOs are creating a brighter future for entire families. An educated individual can go on to travel overseas or to create innovation and business in their own hometowns. This education can also be spread through generations allowing entire families to rise in social standing.

When a family no longer relies on the production of drugs as their main source of income, the FARC may begin to lose supporters. It is a daring venture and one that will inevitably prove to be very dangerous, but for those bold few that seek out the education they deserve, it can make a world of a difference.