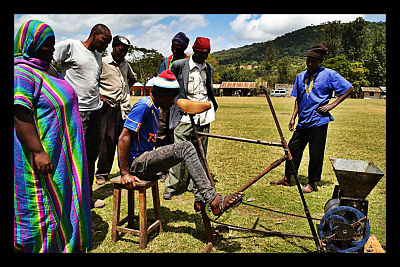 Near the base of Mt. Kilimanjaro, coffee is a staple crop. Coffee growers range from huge commercial enterprises with factories and automated systems, to family farms doing everything by hand. The commercial farms have the clear advantage, but a new technology designed by an international crew of innovators may help the smallest farmers close the gap.

To make coffee, farmers must harvest the bright red coffee cherries and split them in half to access the bean inside. This process, called pulping or shelling, is vital to coffee production and is extremely labor intensive. Doing it by hand is too slow to be feasible. While the big factory farms have machines that require very little labor to operate, smaller villages make do with hand-powered cranks that require a great deal of strength and patience.

The MIT-sponsored International Development Innovation Network Summit this past year played host to hundreds of inventive individuals looking to solve problems like this one. The group included Tanzanian business school student Yesse Joshua Olijange, whose parents are farmers originally from Leguruki and Bernard Kiwia, a Tanzanian bicycle mechanic turned inventor.

According to designer Mona Mijthab, “Most people [in Leguruki] have bikes,” she said, “We thought, we can use parts of the metal pieces instead of the real bike. Things like the frame—these materials are available.”

The team attached the pedals of a bike onto a sturdy metal frame and hooked it up to the hand-cranked pulping machine. Now, instead of requiring immense upper-body strength, a person can operate the machine as they would ride a bike. The machine, which is around three feet tall, takes raw cherries in through a funnel on its top and runs them through a rotating drum with spikes on its interior. The spikes take the outer shell off of the coffee and spits them out separately from the beans. Using a hand crank, farmers can pulp about 33 pounds of cherries every 10 minutes. With the new prototype, the time is reduced to two minutes.

This is only one of many exciting prototypes to come out of the IDIN Summits. Since 2012, IDIN has been connecting innovators from different countries and industries around the world to challenge them to develop not only designs, but prototypes that can improve the lives of those living in poverty. Interest in IDIN’s methods and solutions is growing, and this year three summits will be taking place in Colombia, India and Botswana.

These summits are part of a bigger trend in innovation as the world’s most creative minds apply themselves to solving the problems facing the world’s poorest populations.