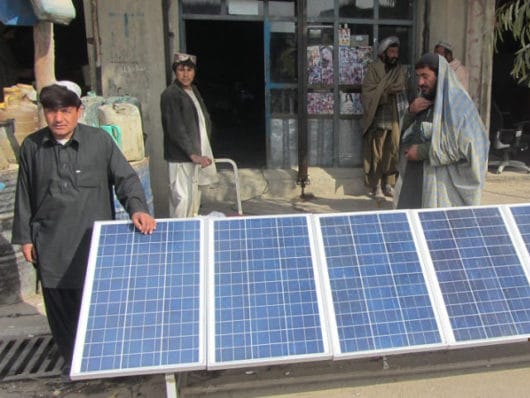 Since its inception 45 years ago, the Barefoot College has trained 1430 people from poor communities to install and maintain solar-powered electrical systems. This was mainly started with the aim of introducing solar power in developing countries.

The most remarkable fact of this program is that all of the students in the solar engineering program are women and they enter with absolutely no prior formal education. These solar engineers return to their villages with a sense of opportunity and independence not only for themselves but also for the community at large.

The founder of the program, Bunker Roy, recognized that the people living in the poor communities are immeasurably knowledgeable about the world around them and the needs of their people. Roy’s vision to bolster the use of solar power in developing countries started with the construction of the first Barefoot College in Tilonaia, India in 1977. It now operates in 100 countries around the globe and 15 states throughout India.

Impact of the Barefoot Program in Afghanistan

According to ALCS 2016-17 survey, only 26 percent of the population in Afghanistan had access to the electrical grid in the years 2011-12. In five years, that number got increased by five percent with around 31 percent of the population enjoying access to the grid. Yet, this access was heavily concentrated within urban areas. The majority of the people living in rural regions of Afghanistan were still yearning to come out of the dark.

The idea of Barefoot College – to enhance the use of solar power in developing countries – became a boon for many in the rural areas. In 2007, merely 2 percent of the households in Afghanistan were powered using solar panels. Today, that same figure has reached 59.4 percent at a national level and 73.2 percent in rural areas. While it’s impossible to tell how much of this success can be attributed directly to Barefoot College, Bunker Roy and his colleagues have undoubtedly made a significant impact.

In his 2011 TEDTalk, Roy shared the story of three illiterate Afghan women who had never left their homes. They came to India and trained to become solar engineers. On returning to Afghanistan, they electrified 100 villages, set up workshops and trained 27 more women to follow their footsteps.

One of the three women, a 55-year-old named Gul Bahar, provided solar electricity to 200 houses herself. She also took the opportunity to educate the head of a large engineering department in Afghanistan on the difference between AC and DC.

Today, more than 84 engineers have been trained by the graduates from Barefoot College to provide a fundamental service to thousands of Afghans in need. Afghanistan is now well on its way to becoming a fully electrified country with 97.7 percent of households having access to electricity. The difference between the electrification of rural and urban homes is also quickly disappearing.

Impact of the Barefoot Program in Honduras

Access to electricity in urban areas of Honduras has reached 100 percent, but one-quarter of the people living in rural areas are still living without it. These same areas are also subject to extreme poverty, severe droughts, and increasing uncertainty in the agricultural industry. Without access to electricity, families are dependent on kerosene lamps that provide poor light, emit toxic chemicals when burned and increase the risk of fire outbreaks.

With help from the Indian Government and the Small Grants Program (SGP), Barefoot College sought to improve the dire situation that the agrarian communities of Honduras find themselves in. Four women from different corners of Honduras were chosen to travel to the original Barefoot College campus in Tilonia, India. Iris Marlene Espinal, Carmen Lourdes Zambrano Cruz, Alnora Casy Estrada and Ingrid Miranda Martinez came to the campus without knowing how to read or write. However, through their practical knowledge, strong will and rugged resourcefulness, they returned home as solar engineers.

These four women have successfully installed 207 85-watt solar panel systems that power lamps, televisions, radios and cell phones for 54 families across Honduras. Without this new technology, the children of a small village called Los Hornos were unable to study indoors even during the day and were showing signs of respiratory issues. To further improve the quality of education for young children in Honduras, the engineers are installing solar systems in schools. The teachers there can now utilize modern technological tools in their lessons.

Seemingly small, incremental changes, like the introduction of solar power in developing countries, have massive implications for the quality of life in poor communities. As Alorna Casy stated in an interview with the UNDP, “We brought back a lot of knowledge to benefit our communities and, in a sense, to help them to escape from poverty”.

In 2016, Barefoot College began the Pacific Island Solar initiative and is still working toward the initial goal of providing new technologies to 2,800 houses across 14 Pacific Island Countries. To date, 10,000 solar installations have already been completed and the construction of a Barefoot College located in Fiji has been approved. The institution is, thus, unstoppable in its mission to revolutionize the use of solar power in developing countries.

Bunker Roy built his first college with the help of 12 “barefoot architects” who couldn’t read or write. Since then, the institution continues to empower those who lack resources but are intelligent enough and in desperate need of a future that fully utilizes their potential. Thus, the idea of enhancing access to solar power in developing countries will definitely spread light in many more dark corners of the world.