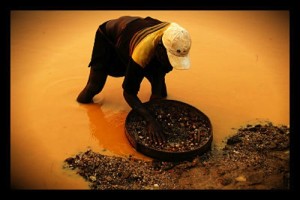 Aside from the popularity afforded by a Leonardo DiCaprio movie, the world has largely forgotten about blood diamonds. A romantic name for an entirely unromantic subject, blood diamonds refer to the gemstones that are mined in conflict zones, often exploiting the miners and putting them at great risk, and benefiting warlords instead of governments.

In 2000, attempts were made to stem the flow of diamonds through the Kimberley Process, which required all diamonds to be certified by governments as legitimate (i.e. mined in non-conflict zones) before exportation. The program was initially successful but quickly fell apart after corruption saw most governments bribed to allow the sale of blood diamonds.

Through ongoing, the issue faded from public awareness until 2011 when Angolan journalist and human rights activist Rafael Marques published “Blood Diamonds: Corruption and Torture in Angola”.

The book documented the human rights abuses and killings in Angola at the hands of the military. Marques describes events of shocking brutality in the military’s effort to maintain control over the diamond trade. Among them, 15 miners were forced to jump to their deaths from a speeding truck at different times so that their bodies would be scattered and more difficult to locate, a mine was purposefully destroyed to bury and kill 45 workers, and there were routine stripping and beating of workers and villagers with the flat sides of machetes.

The book has garnered attention not only for its graphic content but for the struggles Marques has had to face as a result of writing it. He was subsequently sued by eight generals for libel, in an attempt to intimidate or bankrupt him, but recently the courts found his writings protected under free speech.

Yet Marques’ fight seems as though it will be fruitless without international intervention. Angola’s Attorney General is not pursuing the case. Also, the generals accused in the book remain free as Angola’s leader, Jose Eduardo dos Santos, cannot afford to turn against them.

The responsibility now lies with consumers; the flow of diamonds responds entirely to demand in consumer countries. Human rights movements are urging consumers to demand ethically-sourced products or seek alternatives. Though Africa seems unable to stop the production of blood diamonds, global consumers wield the power to deny them a market.