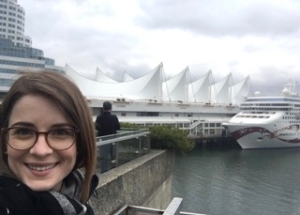 College: University of Iowa, BA in German and International Studies with an Emphasis on European Politics, Universität Potsdam (Germany), MA in Anglophone Modernities in Literature and Culture.

How did you get interested in global poverty? I started my MA program in Germany in 2013, right at the beginning of what would come to be known as the Syrian Refugee Crisis in Europe. This sparked my interest in immigration issues, and poverty, which is often one of the root causes of migration. After leaving Europe and moving to El Paso on the US-Mexico border, my interest in the relationship between poverty and immigration as a domestic US issue was intensified. I believe that everyone, migrant or not, has a fundamental right to feel safe in their chosen home and to live with dignity, security, and legal protection. I believe that being anti-poverty necessarily means being pro-human rights.

What’s your favorite thing about being part of The Borgen Project? I’ve worked for a lot of retail companies, and I really enjoy finally working for an organization where I feel like I am making a difference, empowering Americans to use their voices, and helping people around the world.

What advice do you have for people who’ve just joined the organization? Don’t be afraid to ask questions, we were all new to this at some point! If you can go the extra mile, do. We notice the team members who take initiative!

What does your typical day look like? Sorting and answering emails, checking weekly trackers, and taking 1-1 meetings with team members while wrangling my youngest son. He loves to watch the Zoom calls!

Where’s your favorite place in the world? This is specific, but sitting outside at a café in Freiburg, Germany with a German breakfast, and a book in front of me. Sitting at the edge of Dream Lake in Rocky Mountain National Park is a close second.

Favorite book? I have too many “favorites” to list! One of my most recent favorite books that I suggest to everyone was D-Day Girls, by Sarah Rose. It’s about the women who worked as Allied spies behind enemy lines in occupied France during World War II. It’s historical non-fiction, but some of the events are so unbelievable it reads like a novel. My favorite recent fiction book was Where the Crawdads Sing by Delia Owens.

Favorite movie? It’s pretty cliché, but I love Love Actually. I watch it every Christmastime!

Any random facts you can share with us? I am a trained opera singer, and I can imitate a few animal sounds very accurately, especially dogs and chickens.