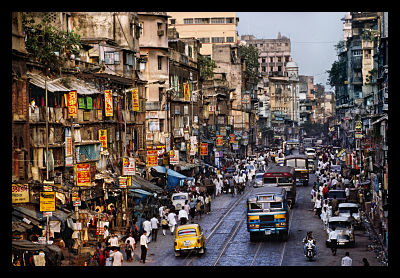 Calcutta is a region that is rich with history, culture and destitution. Calcutta was the former capital of British India, and is one of India’s largest cities and ports, for it is located on the east bank of the Hugli River. Calcutta proves to be the dominant urban center of Eastern India, as it acts as a point of commerce, transport and manufacture. The city holds a diverse range of people, as multiple Hindus, Muslims, Christians, Sikhs, Jains and Buddhists resides in this city.

Languages spoken In Calcutta range from Bengali, Urdu and Oriya to Tamil and Punjabi. Due to the wide range of people and activities, the population density is extremely high with over 4.5 million people, thus overcrowding is an immediate issue. The conflict in Bangladesh during the 1970s has also contributed to refugee colonies in the northern and southern suburbs. Migrants from less urban areas have migrated to Calcutta in search of employment as well, as it is a major export center for tea, petroleum, jute, coal, iron and manganese. Unfortunately, poverty in Calcutta is a huge problem and severe unemployment has been an issue since the early 1950s.

Calcutta has a housing shortage, and approximately one-third of the city’s population lives in poverty-ridden neighborhoods composed of a collection of huts standing on a plot of land that is at least one-sixth of an acre. These dwellings are often not ventilated, single-story rooms with few sanitary facilities, and very little open space.

India is growing into a substantial open-market economy; however, the economy includes a wide range of modern industries and services, including village farming, modern agriculture and handicrafts. The economic downturn in 2011 affected poverty significantly, and the inflation and high interest rates have yet to be alleviated. Furthermore, problems such as corruption, environmental degradation, overpopulation and increasing economic development contribute to the perpetuation of poverty while decreasing the capacity of the government to significantly alleviate any one problem.

According to USAID, “One-third of its population still lives on less than $1.25 per day. Projected to become the world’s most populous country by 2030, India faces tremendous energy, education, health, water and sanitation challenges. India is an important U.S. partner in maintaining regional stability, deepening trade ties and addressing development challenges in India and globally.”

The impact of overcrowding, displacement by natural disasters and lack of sustainable urban policies contribute to the marginalization of Calcutta’s poor; there is simply a lack of means for the homeless to progress and gain material wealth.

The importance of education and farmer organizations is critical for the alleviation of poverty in Calcutta.

Progress in Poverty Alleviation in DhakaPoverty in Cairo
Scroll to top