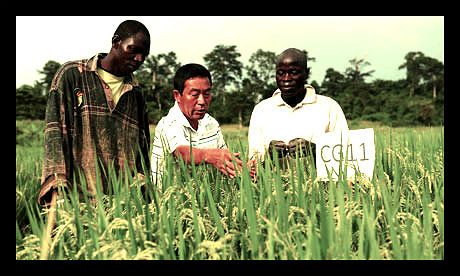 In 2009, China surpassed the United States as Africa’s largest trading partner. Its investments on the African continent have seen astronomical growth in a relatively short period of time — going from $10 billion in 2000 to $200 billion in 2013.

Because of this trading relationship, Africa has experienced an explosion of infrastructure projects and cheap Chinese goods supporting Africa’s consumer market. In exchange, Africa trades valuable minerals and oil, which supports China’s ever growing manufacturing sector.

Mostly, this relationship has been stable but recent shifts in African attitudes toward its biggest investor have caused tension. Some claim that China is no different from the colonial powers that dominated the continent in the past.

Many Africans point to China’s crusade for minerals as evidence of a one-sided relationship that mostly benefits the Chinese. Jobs are scarce in the region with 80% of Africans in “vulnerable employment.” Some claim Africans are missing out on potential jobs, due to the fact that minerals are exported to China in their raw form instead of being processed prior to export. These processing jobs are lost on the African people.

Another example of disappearing jobs can be found in the agricultural sector. For example, many peanut processing plants face extinction simply because China buys the crop and immediately exports it home, forgoing the processing in Africa.

Even the credit that China supplies to Africa comes with hefty strings attached. The money loaned is only to be spent on Chinese goods and Chinese infrastructure. Many of the infrastructure projects are built exclusively using Chinese workers instead of locals.

A sense of losing out on lucrative business opportunities, and the suspicion of colonial intentions, has ultimately boiled over into violence against Chinese workers. Recently, residents of Ghana attacked Chinese miners, blaming them for taking jobs usually reserved for Africans. The miners were mercilessly beaten — up to 200 were eventually deported.

African citizens are not the only ones bearing mistrust for Chinese investment; government officials have been involved in blocking Chinese oil production in multiple countries.

The Niger government has been erasing various parts of a Chinese oil contract that it deems threatening. It commissioned an auditor to review business expenses by the Chinese National Petroleum Corporation and found instances of price gouging and charges that seem less than fair.

In Gabon, an oil field permit was revoked from the Chinese company Sinopec. It was then awarded to a national company.

Many see Africa leveraging its resources as an attempt to prevent wealth from leaving the continent. This is due to the fact that despite numerous mineral deposits and a lucrative trading relationship with China, millions of Africans still suffer in extreme poverty.

Although tensions have flared within the Africa-China relationship, it is still an arrangement that most Africans prefer over the Western style of aid where business and infrastructure projects remain separate. Also, as opposed to aid provided by Western nations, China does not attach human rights or democratic reform requirements as a condition of receiving aid.