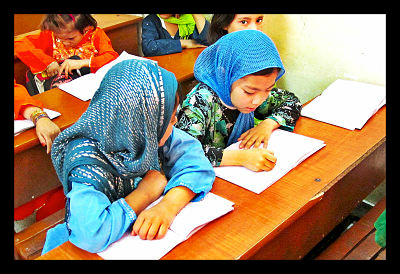 Historically, the Taliban’s regime in Afghanistan is notorious for its brutal oppression of women. Now, the Taliban has reportedly pledged its support for women’s rights.

The Taliban put forward this ‘softer stance’ on women’s issues at recent meetings with Afghan officials and activists in Qatar. Taliban representatives at the talks said that should they return to power, they would support not only women’s access to education, but also their right to work outside the home.

Many hope that these talks will lead to formal peace negotiations between the Taliban and the U.S.-backed Afghan government.

After coming to power in Afghanistan in the mid-1990s, the Taliban began a harsh crackdown on women’s rights. The group specifically targeted women’s education. Soon after taking over the Afghan capital, Kabul, in 1996, the Taliban closed the city’s women’s university and prohibited women from studying at Kabul University. In 1998, the Taliban banned all girls over the age of eight from attending school.

It is no secret that women’s education plays an integral part in a country’s economic and social development. It can both lift individual women and families out of poverty and increase an entire country’s GDP. Investing in girls’ education can also lower child and maternal mortality rates and reduce the likelihood of child marriages. By prohibiting women from attending schools and universities, the Taliban effectively ensured that Afghan women would lack the skills needed to participate in society and therefore sink deeper into poverty.

Though the Taliban fell from power in Afghanistan in 2001, its repressive views of women’s right to education are still widespread. In the years since, women have made only gradual progress toward reentering the educational system. World Bank reports show that as of 2014, 36 percent of Afghan girls attend school.

The three Afghan women who attended the talks in Qatar reported that they were pleased with the Taliban’s pledge to not roll back the progress Afghan women have made. Malalai Shinwari, a former Afghan member of parliament, said, “They said they won’t make the same mistakes that they made in the past. They said they would accept the rights we have today.”

However, many women’s activists remain skeptical about the Taliban’s statements. Shaharzad Akbar, a Kabul-based activist, revealed, “My worry is that the Taliban have a very different understanding of women’s right to education and political participation, and that it is based on their view that women are inherently inferior to men.”

Many delegates from the Qatar talks have expressed their surprise over the Taliban’s supposed willingness to compromise on both women’s rights and other political issues. However, whether the Taliban will follow through on its promises still remains to be seen.