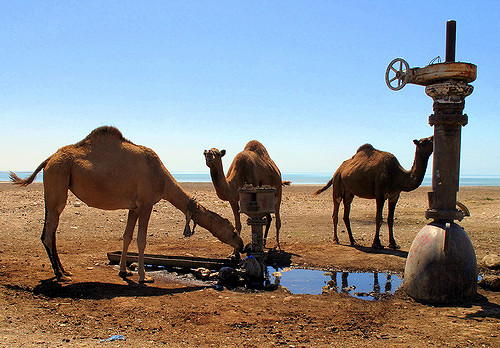 Turkmenistan is an agrarian country in Central Asia that, like other countries in the region, has been heavily dependent on water because of its arid desert climate, high temperatures and low precipitation. This former Soviet republic ranked as the ninth-most water-insecure country in the world and has been ravaged by decades of economic mismanagement during its previous occupation. Water quality in Turkmenistan is rife with problems.

In fact, most of the current ethnic and regional clashes in this central Asian region have centered on the limited water resources available. Water has become a valuable raw material, taking on both economic and social significance. It has effectively become synonymous with life.

Depletion of this precious natural resource as well as pollution of surface and groundwater has straitened the lives of local residents, especially since a whopping 95 percent of the available water resources are channeled towards agriculture.

Turkmenistan water ministry research institute estimates that a third of all land is unusable for agricultural purposes due to heavy soil salinization, caused partly by steadily deteriorating irrigation network. Mountain streams dissipate upon reaching the parched lands so the main water resources are the Amu Darya rising from the snow-capped mountains of Tajikistan and the Murgap originating from Afghanistan.

In June 2015, Turkmenistan suffered its hottest month in recorded history, with temperatures soaring as high as 47.2 degrees Celsius (116.96 Fahrenheit). Water shortage remains the main concern. Yet, just two years earlier, President Gurbanguly Berdymukhamedov signed a decree on February 22, ordering the planting of three million trees in a “grand greening action” involving more than one-tenth of the country’s population. This is despite the fact that such projects would require significant water provisions, whether through irrigation canals, sprinkler systems or water trucks.

With the difficulties in water supply, water quality in Turkmenistan is being degraded. Difficulties with water conservation and pollution from sewage and drainage water are the main obstacles. A significant part of the polluted water is discharged directly to the deserts. Agricultural wastewater is directly fed to the Amu Darya river, which supplies the farmlands with even more salted water. In 1995, with aid from the United States, a water treatment plant was constructed near Dashhowuz to address the wastewater problems in northern Turkmenistan.

Turkmenistan’s “compendium of man-made problems” include the construction of a giant artificial lake, Altyn Asyr (Golden Age Lake), in the middle of nowhere. Environmentalists warn of an ecological disaster waiting to happen, arguing that water will evaporate in route to the desert and cannot be sufficiently replenished to keep the salt levels low. The whole scenario is reminiscent of what has been called “one of the planet’s worst environmental disasters” — the shrinking of Aral Sea.

As competition for water rises due to climate change and rising populations, Turkmenistan needs to help reduce its water deficit by improving the technical state of its inefficient irrigation systems, minimize the rate of ecological hazards by reducing wasteful spending on grandiose projects, adopt automated water-saving technology and reuse treated drainage water for agricultural purposes.

Sadly, the country lacks the scientific, technological and financial means to undertake these critical steps. Addressing water quality in Turkmenistan will require the aid and support of the international community.