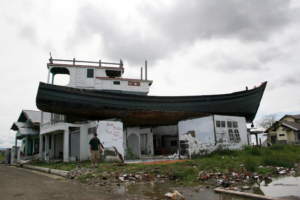 Tsunamis have existed on Earth for as long as there have been oceans. A tsunami is a series of ocean waves that the displacement of water triggers, whether it be by landslide, volcanic eruption or earthquake. The word “tsunami” comes from two Japanese words, “tsu” meaning harbor and “nami” meaning wave. There have been a countless number of tsunamis on the planet. These are the five worst tsunamis in modern history.

When one imagines the five worst tsunamis in modern history, it suggests that these are the largest or deadliest tsunamis. While most of these tsunamis are among the deadliest, what makes them the worst is that they came when people least expected them. However, each one of these tragedies posed a lesson that allows people to take better preventive measures to save as many lives as possible.