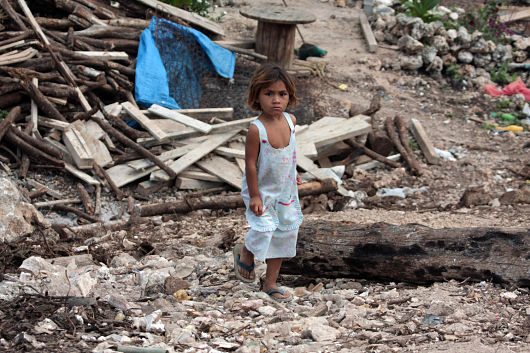 An avid world traveler, there is nothing I love more than exploring new places and experiencing cultures that are vastly different from my own. On my latest adventure, I spent two weeks roaming around the South American country of Peru. Although best known for its well-preserved Inca ruins and lovable llama population, I learned that there are many dimensions of Peru that the average tourist does not see. The spirit of the Peruvian people struck me at many moments during my visit, but here I offer up five things that I learned during my travels that I find particularly revealing.

Although government statistics report that only a third of the Peruvian population lives below the national poverty line, about 8 million people still qualify as poor. As I traveled from town to town in buses and taxis, time and time again I was forced to think about how much better the average living conditions of Americans are in comparison. Poverty in Peru is deepest among indigenous people living in remote rural areas. In fact, the national rural poverty rate is over 50 percent, with 20 percent of people in the Andean region considered extremely poor. This was evident in the villages in the mountains I passed through; they looked almost abandoned, with people living in huts, little modern technology and often no electricity.

For American tourists, this is not a bad thing. Currently, one Peruvian Nuevo Sol is equivalent to approximately $3.15 (USD), making purchasing hotels and food throughout Peru a breeze for thrifty college students like myself. Although I enjoyed the benefit of this exchange rate, it reflects a sad truth about the Peruvian economy. The average GDP per capita is $5,000 (USD), a sum that the majority of Americans can barely imagine earning in a month or two in order to make ends meet.

Every time I would visit a notable tourist site, I was swarmed by locals selling knock-off goods, badly reproduced “Peruvian artifacts” and women dressed in traditional garb with llamas, trying to charge money to take a photo with them. It seemed all fun and games at first, but the more I thought about it the more I realized that these were the actions of desperate people. Clearly these individuals are in need, as they are making a mockery of their own culture in order to make a couple sols – usually just a dollar or less.

4. Despite their poverty, the people are helpful

You might expect an impoverished population to lie and steal in order to make ends meet – this is the stereotype that many Americans adopt when visiting foreign countries. I, however, kept an open mind when I arrived in Peru, and I was more than pleasantly surprised by the conduct of the people I encountered. I did not feel like I was lied to or cheated at any time on my trip. On the contrary, everyone I encountered was extremely willing to help me. From the customs official who gave me restaurant suggestions to the cab driver who pulled over several times to ask locals on the street where my hostel was located, to the woman selling rice who told me to move my cell phone from my pocket to a safer place, I was met with incredible kindness.

5. More than helpful, the people are happy

Although the poverty in Peru was evident in many of the towns that I visited, also evident was the spirit of the Peruvian people. At no time during my trip did it seem that individuals in the towns were unhappy with their situation. Children played soccer, elders sat on the porches and watched the world go by, and those giving my friend and me tours for reasonable sums were passionate about the landscapes of their country. This was perhaps the most inspiring for me, for even without wealth the people of Peru are able to live fulfilling lives and be generous and welcoming to those around them, even foreigners. It is these kinds of people that are worthy of help, and it is important to remember that people in poverty are not much different from you and me.

Partnerships Crucial to the U.S. Global Development Lab University of the People: Free Education for the World
Scroll to top