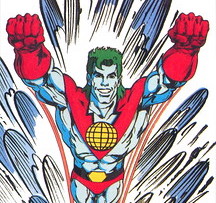 Ask any millennial activists between the ages of 26 – 32 about the after school cartoon series Captain Planet and the Planeteers and you will generally hear them enthusiastically remarked, “Wasn’t that the show about the eco-friendly superhero?”

The 30-minute long cartoon produced by well-known philanthropist Ted Turner and Hanna-Barbera was the first environmentally themed children’s show of its time. The plot was centered around 5 precocious adolescents known as the Planeteers who helped an earthy spirit named Gaia fend off environmentally toxic villains from destroying the planet. When confronted with an insurmountable foe, they would combine the powers of their elemental-based (earth, wind, water, fire, heart) rings to summon Captain Planet who would – along with future millennial activists – remark, “By your powers combined, I am Captain Planet!”

Aside from the exciting entertainment value of an elemental-based, pro-sustainability superhero fighting the evils of environmental devastation, Captain Planet also taught important life lessons to children who would become future environmentalists. The following are 3 ways that Captain Planet inspired millennial activists.

1. Success means working together – No matter what situation facing the five Planeteers, the underlying message was that in order to prevent catastrophic damage to the environment; Kwame, Wheeler, Linka, Gi, and Ma-Ti would have to work together. That principle wasn’t lost on children who would later grow up to be politically aware millennial activists dedicated to both environmentally sustainable policies and combating global poverty.

2. Being smart is cool – From Kwame’s interest in plant life to Linka’s knowledge of computer technology, the message to future millennial activists was clear, intelligence is cool and academic interests are a benefit as opposed to a liability. Furthermore, without their collective intellect, super villains such as Hoggish Greedly would have never been brought to justice for their Eco-crimes.

3. Destroying the environment effects everyone – Looking at the varied origins of the Planeteers, the overall theme of the interconnected vulnerability of all nations to environmental damage was not lost on millennial activists. Whether from Ghana, China, the former Soviet Union, Brazil, or the United States; all the Planeteers were committed to the protection of Gaia and the practice of responsible environmental stewardship and sustainability.