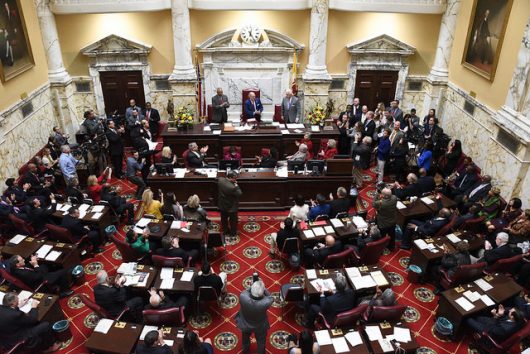 Two senators are elected from each state to serve in the Senate, a part of the legislative branch of the government known as Congress. This is a fixed number implemented by the United States Constitution (article 1, section 3, clause 1). There are never more than 100 senators serving in Congress at a time.

The House never has more than 435 representatives serving in Congress at a time. Each state is guaranteed at least one representative in the House. This law has been in effect since 1913 and is enforced by Public Law 62-5.

The House and the Senate assemble in Washington D.C. at least once a year. These meetings are called sessions and begin at noon on January 3 of each odd-numbered year and can last months at a time. A term for any representative is two years and all members of the House are up for reelection at this time. The next election date for representatives is November 6, 2018.

Congress, which includes both the Senate and the House of Representatives, is the legislative branch of the government and essentially in charge of making the nation’s laws.

Each of the 435 representatives is elected. Voting is a constitutional right for Americans. Knowing the history and mechanics of the House of Representatives, as well as which state has the most representatives versus the least, is useful for making an educated decision when voting for representatives.