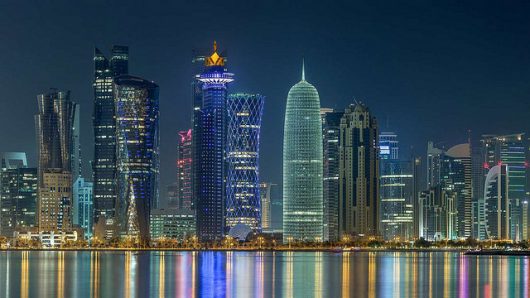 There are many different ways to measure the wealth of a nation, and depending on methodology, answers may vary as to what is the world’s richest country. Since the U.S. has the highest GDP of all nations, at a considerable $18.56 trillion, it is a strong contender, along with China.

However, according to the CIA, IMF and World Bank, in 2016, the world’s richest country also happens to be one of the smallest: Qatar, which is located on the northeastern side of the Arabian peninsula. Qatar has the highest gross domestic product at purchasing power parity (PPP) per capita, meaning the nation’s GDP is the largest relative to the population and the strength of the currency. Under this measurement, the U.S. lags between ninth and thirteenth place.

With a landmass of less than 12,000 square kilometers and a population of 2.7 million people, Qatar boasts an average income of $129,000. Qatar’s success stems from gas and oil reserves, as is the case with other wealthy nations such as Norway. Qatar’s natural gas reserves are third largest in the world, trumped only by Russia and Iran. For this reason, 91% of the nation’s GDP stems from trade, primarily involving oil, and more than 50% of the government’s revenue can be attributed to the fuel sector. In 2016, Qatar sold $9 billion in bonds, the largest Middle East bond issue in history.

With no income tax, Qatar lures wealthy immigrants and expats and continues to grow in both population and wealth. The nation’s success has gained global attention; Qatar was selected to host the soccer world cup in 2022. In response, the government has recently initiated many large infrastructure projects, including sports stadiums and an upgraded light-rail transportation system.

Despite owning such vast wealth, Qatar is often criticized for being behind on education, refusing to acknowledge women’s rights and having affiliations with radical Islam. There exists a significant disparity in the quality of life between the rich and the poor classes, and infrastructure is limited in poorer regions. Ironically, even the world’s richest country must continue to focus on developing and improving the overall quality of life for citizens.

All About the Peace CorpsGoogle’s Education Expands the World, Shrinks Our Brains
Scroll to top