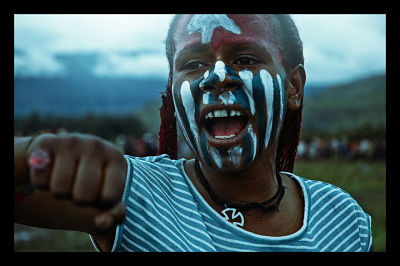 In 1962, the United Nations granted control of West Papua to the Indonesian government. Since then, more than 100,000 West Papuans have been killed or abducted by Indonesian forces with many others having been raped and tortured. The Indonesian military has also been responsible for destroying entire villages and village gardens. Though such atrocities have continued for more than 50 years, the United Nations has yet to intervene on behalf of the West Papuans.

On August 17, a group of activists, politicians and refugees set sail from Australia on what is being called the “West Papua Freedom Flotilla.” Speaking about the purpose of their voyage, activist Izzy Brown said, “West Papuans live in fear every day, in fear of the Indonesian military.” According to Brown, the participants’ aim is to raise awareness “about an issue that has for too long been ignored in the Australian and international media.”

After the fall of General Suharto in 1998, many democratic reforms were passed in Indonesia. But this did nothing to alleviate the brutal oppression of the people of West Papua. Murder and assassinations of political leaders have continued under the regime of current president, Susilo Bambang Yudhoyono. A government ban on journalists and human rights organizations make it difficult for the international community to monitor the situation in West Papua.

Under Indonesian rule, many West Papuans have been jailed or murdered for resisting the government, displaying separatist flags or speaking out in support of a free West Papua. For example, activist Philip Karma was arrested in 2004 while participating in a peaceful protest of the Indonesian government and raising a Morning Star Flag, which is a Papuan symbol. For his actions, Mr. Karma is currently serving a 15-year prison sentence.

At the end of this month, the Freedom Flotilla will land in Papua New Guinea and attempt to enter West Papua. The Indonesian government has said that it intends to intercept the flotilla and turn away the participants. Hopefully, this event will help bring awareness to a conflict that has not received much media attention in the West. But if the past is any indication, even the Freedom Flotilla may escape the attention of the international media.

In 1994, Bishop Desmond Tutu issued a statement calling on the United Nations to intervene on behalf of the West Papuans. In that statement, he said, “The people of West Papua have been denied their basic human rights, including their right to self-determination. Their cry for justice and freedom has fallen largely on deaf ears.” Almost ten years later, there are still too few listening to the cries of the West Papuans.