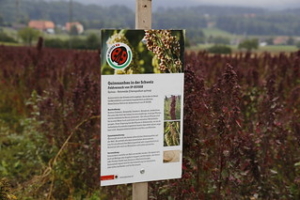 Bolivian President Evo Morales recently appeared before the UN to promote the unusual resilience of the quinoa crop to the international community. Fittingly, President Morales-himself a quinoa farmer-was appointed Special Ambassador by the UN’s Food and Agricultural Organization (FAO) following their declaration of 2013  as the “International Year of Quinoa.”

Pronounced correctly as keen-wah, quinoa-a staple in Bolivian and Peruvian diets for years-has the unique ability to grow under the most challenging of conditions; including high altitude, poor soil quality, and low annual rainfall. A distant cousin of both beets and spinach, quinoa has been thrust into the limelight lately as a realistic solution to the chronic food security problems faced by many developing nations. Thus, the FAO hopes to increase awareness and production of the crop by calling for 2013 to be known as “International Year of Quinoa.” Additionally, the high nutrient value and relatively low production costs make even Western European nations such as Italy and the Netherlands keen to make full use of their limited amounts of farmland.

The crop, with more than 120 variations, has been modified and researched for years in an attempt to develop seeds that are best suited for the particular climates and soil characteristics they will encounter abroad. Furthermore, by utilizing these growing technologies the output of a single hectare of quinoa can increase from the traditional 600 kg to over a ton, opening the door to limitless possibilities in regards to global food security and ending word hunger. The quinoa truly is a miracle crop, and deserves the title of having 2013 known as the “International Year of Quinoa.”
– Brian Turner