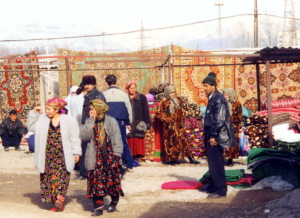 In conjunction with the United States Agency for International Development and global nonprofits, Tajikistan has made remarkable steps in countering its tuberculosis epidemic – by way of spreading awareness and the help of external nations. Reducing the burden of tuberculosis in Tajikistan is truly a global effort with many working factors and components, all of which have combined to have a substantial effect on spreading awareness and countering the disease.

Like many of its Central Asian neighbors, the landlocked mountain nation of Tajikistan struggles in its fight against poverty. As of 2016, just over 30 percent of Tajiks lived below the international poverty line, just scraping by with mass imports of food and resources from Russia, Kazakhstan, China and Iran. There are many contributing factors of this widespread poverty, including rampant corruption, substantial drug trafficking and thousands of displaced persons. Despite this sweeping poverty, however, efforts have been made to improve one substantial area of Tajik life: health and wellness.

If the proper resources are available, tuberculosis can be easily treated. According to the WHO’s report of tuberculosis in Tajikistan, out of a cohort of 5,324 members, 89 percent were successfully treated for their tuberculosis. The success of treatment drops significantly, however, when concerning those who are HIV-positive and those with multi-drug resistant tuberculosis.

While a significant portion of this decline in incidence and rise in success of treatment can be attributed to the Tajik people, much of the funding and interventions have been spearheaded by the United States. USAID, a U.S. government agency focused on the development of foreign nations, has been the primary arm of U.S. funding and involvement in reducing the burden of tuberculosis in Tajikistan through increased resources and general awareness. Specifically, the USAID TB Control Program helped support the local Tajik governments with financial resources and infrastructure, creating a five-year National TB Program that includes training for health workers, informing at-risk populations and providing more widespread and affordable diagnosis and treatment options. This National TB Program is supported by $13.2 million in aid.

In addition to providing funding, USAID is also focused on streamlining the processes related to reducing the burden of tuberculosis in Tajikistan. In this landlocked, former-Soviet nation, USAID helped reduce the treatment time for tuberculosis from 24 months to nine months. While this is still a significant amount of time, this improved treatment theoretically allows for those who have been properly diagnosed with tuberculosis to return to work, happy, healthy and hopefully ready to contribute to Tajikistan’s dwindling economy.

While Tajikistan has taken the first, crucial and often most difficult steps in tuberculosis prevention and treatment, the country still has a long road ahead. Continuing to educate populations and streamline treatment and diagnoses must spread to other populations, including migrants (of which, Tajikistan has a significant population), prisoners and children, in order for Tajikistan to have a far brighter future.