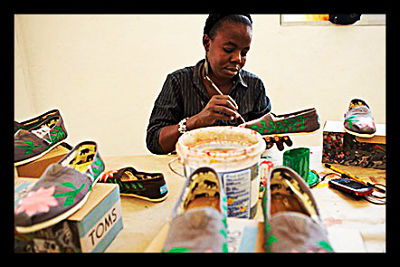 Founded in 2006, TOMS Shoes quickly gained mainstream popularity largely because of its socially responsible, feel-good, “one for one” model of operation. Under this model, TOMS gives away a pair of shoes to someone in a developing country for every sale of their retail shoes. However, TOMS has also come under fire over this same model that has fueled its popularity. Critics argue that donating shoes to people in developing countries can hinder economic growth by undercutting local producers.

At the 2013 Clinton Global Initiative (CGI), TOMS founder Blake Mycoskie announced his plans to begin manufacturing some of the company’s shoes in Haiti, starting early next year. This five-year investment will initially employ 50 local workers, with a goal of doubling this amount by the end of the year. This initiative comes in addition to TOMS’ existing Haiti Artist Collective program, which partners with 31 local Haitian artisans to design and hand-paint custom shoes for sale on the company’s website.

In addition to creating living wage jobs for people in Haiti, TOMS aims to provide healthcare, education and early childhood support to its factory employees by partnering with local organizations. Throughout the process, TOMS vows to oversee working conditions in Haiti and ensure that fair wages are being paid.

TOMS currently produces its shoes in China, Argentina and Ethiopia, and exports them to impoverished places. According to Public Radio International, Mycoskie has pledged that TOMS will produce at least one-third of its shoes in the countries where they are being donated to by the end of 2015. This will help build a more a sustainable, locally minded shoe industry in the countries the company serves.

After donating more than 10 million pairs of shoes to people in need, Toms is shifting its focus to targeting the causes of poverty, rather than providing temporary solutions to its complex effects.