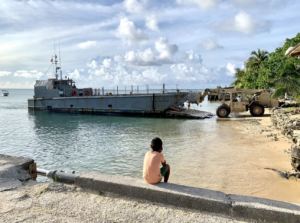 Carlton Abon is a singer, songwriter and musician. For his whole life, he carried out the thousand-year-old musical traditions of the people of the Marshall Islands, singing about their stories and legends. His successful career as a recording artist, however, was brought to an end when a cancerous growth near his thyroid required a surgery that cost him his singing voice. He has worked a desk job in the nation’s capital of Majuro ever since.

A Paradise with a Dark History

The Marshall Islands is a nation comprised of 29 coral atolls, spread out over a remote swath of the Pacific Ocean roughly the size of Mexico. It is also a sparsely populated country. Most of its 58,000 residents live on the two densely populated atolls of Majuro and Kwajalein, leaving the rest of the country an isolated and idyllic paradise of pristine beaches, untouched lagoons and coral reefs. Its remote location, however, also made the Marshall Islands a target for U.S. nuclear tests during the Cold War. Between 1946 and 1958, the US detonated 67 nuclear devices in the Marshall Islands. This had a cumulative radioactive impact of more than 7,000 Hiroshima bombs. Hundreds of Marshallese were relocated by the US government as their home atolls became saturated with levels of radiation more than six times the livable amount.

These tests sparked a healthcare crisis in the Marshall Islands. There was a massive rise in the number of radiation-linked diseases in the Marshallese population. Record numbers of stillborn and deformed babies were born in the years following the end of the tests, and many citizens suffered permanent eyesight and skin damage as a result of the intense heat. Decades later, the pain of the blasts is still being felt in the Marshall Islands in the form of a debilitating disease. Thyroid cancer has become one of the leading causes of death for those in the Marshall Islands. US government studies predict that 50% of those cancer cases are a direct result of the radioactive fallout that blanketed these islands decades earlier. These daunting figures are compounded by the fact that there are no permanent oncologists practicing in either of the nation’s two hospitals. Common cancer treatments, such as chemotherapy, are not offered due to the nation’s dated healthcare infrastructure. The combination of these factors has turned radiation-caused thyroid cancer into a public health crisis in the Marshall Islands.

A Culture in Jeopardy

Thyroid cancer, as well as high rates of other communicable diseases, have also had a disastrous effect on the culture and livelihood of the nation. Like Abon, many victims of the healthcare crisis in the Marshall Islands are from an older generation of islanders. High mortality rates among this demographic means that indigenous traditions and native ways of life are slowly disappearing in the modern population of islanders. As Marshallese music producer Daniel Kramer explains, “You have an older generation that was unable to pass down what it could if it was at its full potential. If even one or two of its talented artists are affected, it has a big impact on a small community.” As artists like Abon lose their ability to pass on their cultural knowledge, thyroid cancer has begun to destroy the ways of an entire people, a threat that has prompted leaders in the Marshall Islands to take action.

Since the nuclear testing in the mid-1900s, the US government has repeatedly attempted to provide reparations and attempt to build up treatment capacity in the Marshall Islands’ hospitals. However, these actions have been proven ineffective; high rates of poverty and high prohibitive costs make adequate treatment unfeasible for many Marshallese. This is why in 2017, the Marshallese government established a National Nuclear Commission, one of the first of its kind. Working closely with nuclear-justice-focused NGOs such as REACH-MI*, the commission aims to:

Additionally, a Marshallese initiative in the US is trying to preserve the deeply-rooted musical traditions of the island nation through modern technology. KMRW, a radio station run out of Springdale, Arkansas, has become the first island music station in the United States. Residents of Springdale, which is home to a sizable Marshallese immigrant population, can enjoy island music, culture and even public health information from the station. Since the U.S. used the Marshall Islands as a target for nuclear tests, the people have been facing a health crisis. Radiation related cancers, such as thyroid disease, have taken a toll. However, the government of the Marshall Islands and NGOs such as REACH-MI* are stepping in to help. Although the long-term impacts remain to be seen, initiatives like these are crucial for fighting the healthcare crisis in the Marshall Islands and preserving its unique culture. – Shobhin Logani Photo: Flickr

Immigration, Welfare and Hunger in Norway Why the Blue Economy is the Economy of the Future
Scroll to top