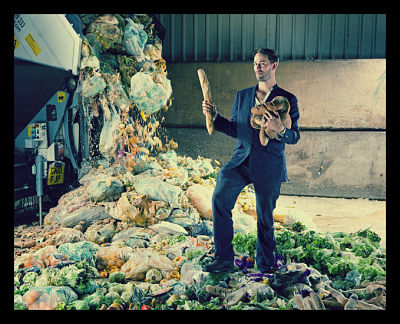 With hopes to change the global opinion about the waste of “unwanted” food, Tristram Stuart, author of Waste: Uncovering the Global Food Scandal and founder of Feeding the 500, prepared a meal for global ministers and diplomats February 19, 2012 in Nairobi. The meal was
prepared with only “ugly” ingredients, Stuart claims.

The five course meal consisted of yellow lentil, grilled sweet corn, French Beans and pleothra of other vegetables. Although well- presented, the dinner ingredients likely would have been rejected by various UK supermarkets for their appearance. Through his meal, Stuart hoped to uncover the truth about unwanted fruit and vegetables.

“The waste of perfectly edible ‘ugly’ vegetables is epidemic in our food production systems and symbolizes our negligence,” Stuart tells.

In addition to cost and environmental impact, food waste increases pressure on the already fragile global food system. In a country with millions of hungry people, it is a scandal that UK supermarkets waste so much food, adds Stuart. The expected amount of vegetables wasted every week is 40 tons, 40 percent of what the farmer grows.

A study by the Food and Agriculture Organization (FAO) reported that one third of all food produced worldwide is either wasted or lost, resulting in 1.3 billion tons annually.  Combined data from the FAO and Unep estimates the annual cost at approximately $1 trillion.

Half of all consumable food in industrialized countries is wasted, the FAO claims. In retrospect that is 300 million tons of usable food, more than the total amount of food production of Sub-Saharan Africa sufficiently feeding 900 million hungry.

With these figures as evidence, use of wasted food can benefit farmers and the global hungry alike. Instead of simply asking to reduce food waste, it would more beneficial to utilize the food wasted, Stuart claims.

In his TED talk about global food waste, Stuart reflected on personal application of food waste utilization as a teen raising livestock. By utilizing scraps from his school, local bakers and other farmers “throwing out potatoes because they are the wrong shape and size”, Stuart was able to provide plump, healthy and profitable pigs. Not only was this method environmentally friendly, it was the most economically sufficient, Stuarts exclaims.

Farmers have learned to use “leftovers” to feed their livestock.  Because livestock serve as a source of livelihood and supplement for farmer family diets, the use of food waste helps famers both health-wise and economically, Stuart adds.  If applied by all farmers and non-farmers alike, quality of life would increase while global hunger would decrease.

Reflecting on yet another example from his pig-raising days, Stuart told his TED talk listeners of yet another applicable story. One day when he was feeding his pigs, Stuart saw a rather consumable tomato loaf. Stuart washed it off, sat down and ate it. For Stuart this was the first application of what he would later term Freeganism, an exhibition of the injustice of food waste and the provision of the solution. The solution to food waste and global hunger is simple:  to sit down and eat the food than throw it away, Stuart concludes.