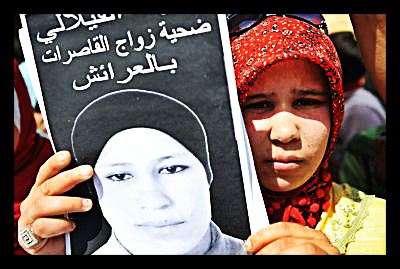 A teenage girl in Morocco committed suicide last month after being forced to marry her rapist. Her death occurred amidst debate over a controversial article of Morocco’s Penal code which allows rapists to avoid a jail sentence if they marry their victim.

The article in question, Article 475, received global attention after a similar case in March 2012 in which Amina Filali, 16, drank rat poison after being forced to marry her rapist. At the time, activist Abadila Maaelaynine said on Twitter, “Amina, 16, was triply violated, by her rapist, by tradition and by Article 475 of the Moroccan law.”

In Moroccan society, a woman who loses her virginity – even by rape – is considered unfit to marry. “There’s a mentality that says that a girl that’s no longer a virgin is worthless,” said Khadija Riyadi, President of the Moroccan Association of Human Rights (AMDH). She went on to say that families feel like they cannot support an “unmarriagable” daughter and to make her marry her attacker seems like the only solution.

Opponents of Article 475 pressured U.S. president Barack Obama who met with Moroccan King Mohammed VI on Friday to urge the king to repeal the article.

A move to protect women from violence was submitted to the Moroccan parliament earlier this month, a year after the initial idea was proposed. Justice Minister Mustapha Ramid told Al Jazeera, “Until now, it’s still just a law project that’s being considered by parliament but hasn’t been rectified. We have not yet formally edited the article.”

“Delays in legal reform in Morocco are leaving women and girls exposed to abuse,” said Philip Luther, Middle East and North Africa Director at Amnesty International. “Unless the gap is closed between the authorities’ rhetoric about improvements to the law and their delivery of these changes, more lives will be at risk.”