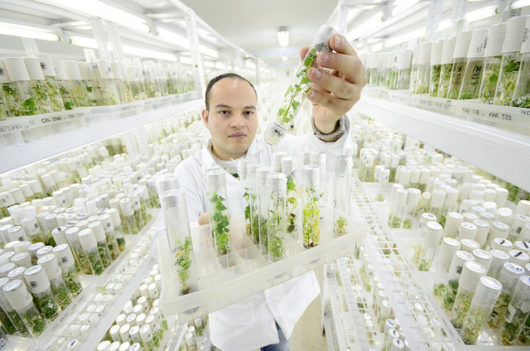 The way that humans have evolved and adapted to changing climates have all been surrounding our food. Today, although it may seem that there is an abundance of food, in reality, it is scarce. In our world, 812 million people face hunger and malnutrition every day for countless reasons.

Working to fight world hunger and continue to adapt to a changing environment are top priorities to ensure that the human species continue to thrive. Through agricultural education, environmental conservation and the efforts of seed banks we can alleviate the issue of world hunger.

Before getting into how seed banks can help impoverished areas, their definition needs to be established. A seed bank is essentially a gene bank for seeds. They are created in order to prepare for natural disaster and climate changes. By taking seeds from all different plant variations these banks aim to preserve the biodiversity that the world currently has. There are currently more than 1,000 seed banks worldwide established, ranging from the Doomsday Vault that is capable of withstanding being bombed to the small craft container.

The Importance of Seed Banks

Seed banks are mainly a preventative measure in the case that something goes horribly wrong. They are created for the chance of natural disasters, nuclear fallouts and outbreaks of disease. The industrialization of agriculture has made our crops less genetically diverse, and therefore less able to adapt to their surroundings. Seed banks preserve the genetic diversity of the plants in the world. This means that plants designed for different climates will not go extinct as the world’s ecosystem changes.

Seed banks are located everywhere. In the United States, there are 20 registered seed banks alone. These seed banks are also essentially ensured since there are backup collections of all seeds at the National Laboratory for Genetic Resources Preservation in Colorado. Worldwide, there are more than 1,000 seed banks in place. The largest seed bank is Svalbard International Seed Vault. It is nicknamed the Doomsday Vault. It’s located on the side of a mountain in Norway. It is able to survive bombings, earthquakes and other disasters. It holds 825,000 seed varieties currently, and, even if the power goes out, the vault has the ability to store them for up to 25 years. Seed banks come in all shapes and sizes though. There are many large seed banks on each continent, but individual states and communities also have created smaller seed banks.

Everybody can create its own seed bank. It is as simple as taking the seeds from the produce and freezing them in a little container for later use. People can also take seeds and donate them to help fight world hunger and feed families across the globe. Organizations like Seeds to the World, Seeds of Peace and Seed Global Health all accept donations of seeds from the produce people eat every day as well as prepackaged seeds. There are also many nongovernmental organizations that support the production of community seed banks worldwide, including the Local Initiatives for Biodiversity Research and Development (LI-BIRD). This organization supports the efforts of local farmers in impoverished areas to overcome the lack of agricultural diversity.

With the rise of genetically modified plants and climate changes people all across the globe face issues related to agriculture and food production. Seed banks can aid areas that are most affected by hunger by ensuring the conservation of local crops that are already adapted to the region and reviving the use of specific plants to provide agricultural stability.