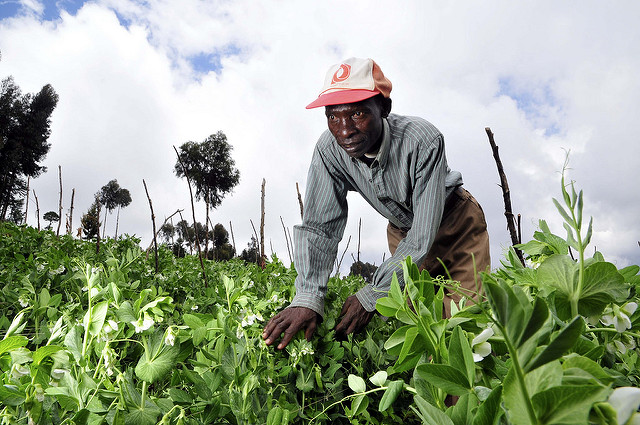 As of 2015, 153 million African citizens reported being impacted by food insecurity. Food insecurity is defined as a state of living where one is unable or has limited access to obtain consistent, nutritionally valued food to maintain a healthy lifestyle.

The average per capita income of sub-Saharan African is approximately three times lower than that of the rest of the world. One of the main sources of income in Africa is agriculture which can easily be impacted by the quality of soil, a stable water source, temperature and use of fertilizer.

That being said, in areas such as Kenya, 42 percent of the population (44 million people) live below the poverty line. Agriculture is one of the top sources of income and a major boon to the nation’s economy. In fact, it gives work to 70 percent of the workforce and contributes to 25 percent of Kenya’s annual gross domestic product.

Kibera, Nairobi, one of Kenya’s largest slums, suffers from a lack of resources such as water, land space and labor. With a consistent rising population (4.1 percent annually in Nairobi), more food is needed to sustain life. An upcoming technique to combat this problem, being implemented not only in Kenya but in surrounding nations such as Uganda, is sack farming.

Sack farming is the process of utilizing ordinary scrap sacks as the foundation for producing crops such as potatoes, carrots and spinach. By implementing sack farming in Kenya, food insecurity throughout the country can be tackled. All that is needed for this form of planting is the sack, manure, soil, small stones for drainage and the desired seeds.

Beginning with the necessary equipment, sacks of any size and texture can be used, from burlap encasings to plastic bags. Fertilizer can be made from composted food and waste. As for labor, the younger communities in Kenya have stepped up to take responsibility.

Effects of Sack Farming in Kenya

Depending on the size of the sacks, one sack has the ability to grow up to 45 seedlings. In terms of income, if a household is able to afford three sacks with 30 seedlings each, the production would be substantial. This would increase the household’s income, therefore increasing the ability to purchase other products ranging from electricity to eggs and milk.

Sack farming in Kenya has the ability to produce crops such as spinach, lettuce, beets, arugula, potatoes, carrots and onions. Not only does this impact the economy, but families will finally be able to have access to a stable food source. This means fewer chances of developing nutritional deficiencies, especially in younger children.

Sack farming in Kenya is a more convenient and realistic way of feeding one’s family and community, especially when living in a rural or slum area. The process is an inexpensive, simple way to produce nutritious foods, combating the issue of food insecurity in areas throughout Africa.