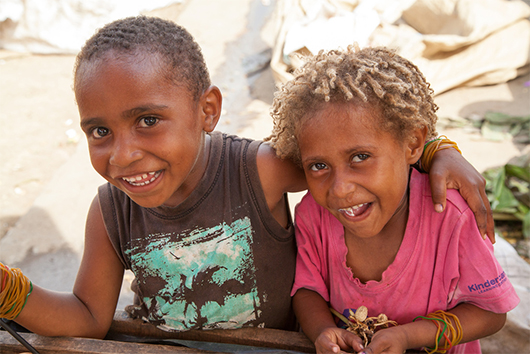 When children are photographed, smiles come beaming through; this is generally true regardless of a person’s wealth or lack thereof. Smiles are indicators of happiness and hope that people in poverty can exhibit. While it is very true that many in poverty do not smile as their hope and joy are syphoned away by the cares of harsh everyday living, smiling is still exhibited by many throughout the globe.

Ron Gutman spoke at a TedTalk conference about the power of a smile. He cited studies done by UC Berkeley and Wayne State University who measured the width of alumni yearbook pictures and pre-1950 MLB player baseball cards respectively. They found that the wider the measure of a person’s smile, the longer that person lived and had a more fulfilling life.

This is not just a Western phenomenon. A separate study done by Paul Ekman in Papua New Guinea found that the aboriginal people perceived another person’s smile in the same way the rest of the world does, “to express joy and satisfaction.”

Smiling can be used as an emotional superpower. Gutman says that on average a person will smile around 20 times per day, yet “those with the most amazing superpowers are actually children, who smile as much as 400 times per day.”

Recently, a German study took fMRI images of people smiling and found “that facial feedback modifies the neural processing of emotional content in the brain, in a way that helps us feel better when we smile.”

This research is evidenced, in part, by photographs of people who live in poverty. When photo journalists are on assignment in areas of extreme poverty—in conditions that would strip most people of hope—smiles are spread across the faces of children.

Sebastian Cuvelier witnessed this when he traveled to the slums of Manila for a two month stay. He took pictures of children playing in the filthy streets, children taking baths in a blow-up swimming pool due to the lack of a proper bathroom, a mother smiling as she watched her children play and people living in make-shift houses.

The people of Manila are living in conditions that are heart breaking, but their smile is infectious, lights up their eyes, and draws the viewer in. Their hope shines through, a life that is grounded in family and not letting poverty steal their joy even when they have every reason to lose faith.

Part of the Manila street children’s hope, and the smiles, is through a Nongovernmental Organization (NGO) called The Virlanie Foundation. Their goal says that they are “giving back the smile to street children.” The organization was founded in 1992 and they work to help and protect the street children who are most vulnerable, such as the abused, neglected and orphaned, in order for those children to grow into productive, responsible adults.

Work by organizations like the Virlanie Foundation is important because while a smile is an indicator of hope, poverty tries to steal a person’s smile away. There are just as many pictures of smiling children in slums as there are children who have no smile because they have no future in their current condition. Giving a child hope through practical life-changing resources restores the smile and gives that child a chance to see their hope turn into something tangible. Then that child can use their smile to spread hope to others who need their own superpower smiles restored.