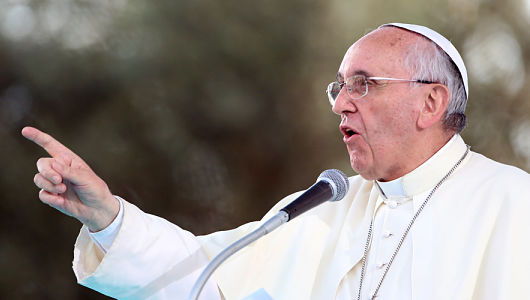 In a landmark visit to Ecuador, Pope Francis denounced the “irresponsible use and abuse of [the earth’s] goods” as the leading factor contributing to global poverty. The Pope addressed a crowd of over 1 million Ecuadorians at a mass on July 7 and touched on several issues concerning increasing poverty statistics.

One focal point of the Pope’s speech regarded Ecuador’s rich natural resources being the target of impending oil drilling. According to CBS, “Containing both the Galapagos Islands and Amazon rainforest, Ecuador has more biodiversity than any other country on earth. At the same time, it is heavily reliant on revenues from its oil reserves.” The South American nation boasts a rich oil reserve underneath its historically pure environmental ecosystems. The Pope strongly advocated for Ecuadorians to protect their oil reserves and to come together to preserve their natural resources.

Pope Francis’ message to Ecuador made impressions throughout the world, especially with Catholic investors. Since the Pope began publicly condemning environmental degradation, investors from all over began pulling out of fossil fuels and reinvesting their finances into more environmentally conscience resources. The driving force behind this change in investment comes at the Pope’s urging to think long-term. Pope Francis compelled not just Ecuador, but the rest of the plant to “consider the long-term consequences of harvesting the planet’s natural resources over its immediate payoff.” A strong message by the Pope for every one, of all beliefs, to think about the wellbeing of our planet.

While the Pope made his address at a Catholic mass with religion at its core, his words must resonate outside of a particular faith. His urgency to think long-term is critical in preventing the spread of poverty. More deforestation, mining, and oil drilling would displace millions more each year, leaving them homeless and their lives in ruins. Pope Francis makes a strong case for re-evaluating the way we approach our planet’s resources; it is up to us to listen and follow through.