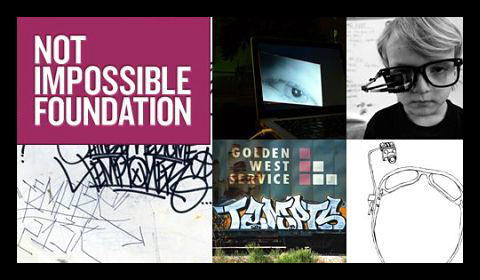 The impetus for the trail-blazing Not Impossible Foundation took place when Mick Ebeling befriended the gifted street artist Tony “Tempt One” Quan, who was suffering from the onset of Lou Gehrig’s disease. Lou Gehrig’s would eventually paralyze his entire body, stripping Tempt of his ability to communicate through artistic expression or any other means of expression other than the careful movement of his eyes.

Moved by the tragedy of Tempt’s situation, Ebeling recruited a team of talented individuals from Graffiti Research Lab, Free Art and Technology Lab and other hackers to create a device that would enable Tempt to create artwork again. In April 2009, after seven years of laborious research, experimentation and refinement, Ebeling and his team presented Tempt with their creation, the EyeWriter. The EyeWriter is an astonishingly innovative device that allows paralyzed individuals to communicate using only his or her eyes.

Recounting his perseverance in creating the EyeWriter, Ebeling said, “When I feel a spark, I commit wholly to the idea, without necessarily having a sense of how, or if, I will be able to complete it…when presented with a challenge, I find it incredibly hard to back down.”

Not surprisingly, after the launch of the EyeWriter, Ebeling and his team were soon the recipients of multiple honors in the technological world. For instance, Time Magazine honored the device by declaring the EyeWriter as one of the 50 best inventions of 2010. The recognition that Ebeling and his team received after Time’s illustrious title enabled the launch of Ebeling’s next endeavor, the Not Impossible Foundation.

The Not Impossible Foundation provides a self-description so to-the-point and succinct that it is composed of a mere six words. The Foundation Having establishes itself as a technology-oriented lab by breezily describing itself as “technology for the sake of humanity.”

Adhering to the standard of innovation and promise of the 2009’s EyeWriter, Ebeling and his team is tackling the previously impossible by working to create smart canes for the blind along with 3D-printed prosthetic limbs for amputees. The Not Impossible Foundation strives to construct new yet affordable technology to revolutionize healthcare.