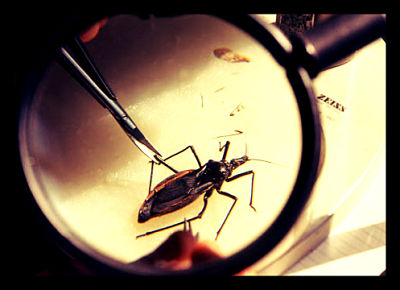 The World Health Organization (WHO) wants to draw attention to diseases that have typically been neglected and underreported. Referring to treatment for schistosomiasis, Dr. Margaret Chan, Director-General of the World Health Organization, stated, “We can blanket this part of the world [Africa] with medicines that rid every schoolchild of worms and eggs, parasites that interfere with their learning, impair cognitive development, and compromise their nutritional status.” These are ten parasitic diseases WHO classifies as neglected.

1. Chagas Disease is transmitted through a triatomine bug’s sting, or by contact between the bug’s infected feces and open wounds or mucous membranes. In its chronic phase, parasites embed in tissue such as heart or digestive muscle. Symptoms include a purplish bruise, a fever lasting several weeks, headache, abdominal pain, cough, rash, diarrhea, chest pain, heart failure, and less commonly seizures or paralysis. There is no vaccine available, but insecticide treatments, bed nets, and good hygiene practices can prevent contraction.

2. Dracunculiasis, or “Guinea-worm disease” is caused by the ingestion of contaminated water. Over about a year, the parasite painfully migrates through tissues, eventually emerging from a painful blister formed on infected persons’ feet. Often relief is sought by immersing the body in cold pond water. Unfortunately, this causes the female worm to release thousands more larvae into the water. When a person drinks the contaminated water, the larvae migrate through their intestinal wall and the process begins again. There are no drugs available to prevent or heal the disease. Patients frequently remain sick for several months, although it is rarely fatal.

3. Echinococcosis develops in humans by ingestion of Echinococcus granulosus eggs, primarily through contact with infected dogs or by consuming contaminated food or water. If left untreated, Echinococcosis has a high fatality rate in humans.

4. Foodborne Trematodiases are a group of parasitic infections caused by unsanitary food preparation or defecation of infected animals in fresh-water sources. The infections that make up Foodborne Trematodiases are Clonorchiasis, Fascioliasis, Opisthorchiasis and Paragonamiasis. Symptoms include fever, abdominal pain, chest pain, bacterial infections, nausea, skin rashes, and in some cases fatal forms of bile duct cancer.

5. Human African Trypanosomiasis, or “Sleeping Sickness” is transmitted by the bite of a tsetse fly. The disease affects mostly poor populations living in rural areas of Africa. If left untreated, Sleeping Sickness is usually fatal.

7. Onchocerciasis, or “River Blindness” is transmitted through the bites of infected blackflies. Infection leads to blindness, skin rashes, lesions, intense itching, and skin discoloration. Insecticide treatment of blackfly breeding sites can prevent the spread of onchocerciasis, and there is a drug available to treat symptoms and reduce transmission potential.

9. Soil-transmitted Helminth infections are transmitted by roundworm, whipworm, or hookworm eggs present in soil where sanitation is poor. It is estimated that over 880 million children need treatment for these parasitic infections which can cause diarrhea, abdominal pain, weakness, intestinal bleeding, loss of appetite, reduction in absorption of micronutrients, intestinal obstruction, rectal prolapsed, and diarrhea.

10. Cysticercosis is an intestinal infection of adult tapeworms that can develop in a number of tissues. Those located in the central nervous system are known to be the most frequent preventable cause of epilepsy in the developing world.

The Trickle-Up Solution to Global PovertyHunger Kills Every 10 Seconds: A New Campaign
Scroll to top