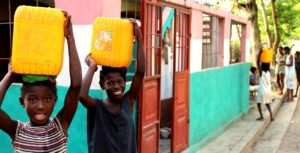 Move for H2O is a Canadian fundraising initiative in partnership with HOPE International where volunteers can participate in activities to raise money for water-insecure countries. Move For H2O’s 10th annual campaign selected the Haitian region of Fon Batis to support 4,989 people in the area who must walk 3 km uphill to the nearest water source, the Marianne Spring.

Exercise for a Cause

Move for H2O organizes public and virtual athletic events across Canada that individuals or teams can participate in while fundraising. Participants registered for events like Bike in Edmonton, Run in Vancouver and Kickbox in Burnaby, all of which the organizer hosted. Others held their own athletic fundraising events from kayak paddling to dog fetching.

Throughout the weeklong event, volunteers are provided with a fundraising page. This way, friends and family can cheer them on while they work out. Move for H2O encouraged participants to move 6 km to match the distance the people of Fon Batis walk daily for water, according to its website.

Organizers at Move for H2O were excited to provide for the people of Fon Batis through the 2022 fundraiser. Haiti remains one of the world’s most water-deprived countries, with 3.3 million people lacking access to clean water. Additionally, World Bank reported that water access in Haiti has decreased from 62% in 1990 to 52% in 2015, likely due to deforestation and a lack of sanitation infrastructure in rural regions.

HOPE International describes clean water as “the catalyzing step communities take to end the extreme poverty.” The nonprofit designated this year’s fundraising campaign with the purpose of constructing a water system in Haiti. It will bring clean water from the Marianne Spring directly to the people in the 12 neighborhoods of Fon Batis, instead of the other way around.

This development could directly impact the health of people. It could improve living conditions for the women and children who trek over two hours across high and uneven terrain to the Marianne Spring, according to Move for H2O.

This year’s fundraiser, which took place from June 10th to June 18th, raised $152,453 for Fon Batis. Move for H2O posted a Twitter update following the fundraiser, stating that the money will go toward digging trenches, installing tanks, laying pipes and assembling taps for the water system.

Six kilometers of piping will send water from the spring into four tanks, according to Move for H2O’s website. The water will flow into community taps in Fon Batis after a treatment plant filters it. The organization foresees “profound transformation” coming to Fon Batis, “because water changes everything,” Move for H2O said on Twitter.

HOPE and Move for H2O’s commitment to providing water to families improved the lives of more than 12,000 people. Over the last 10 years, the fundraiser has raised about $1.07 million which went towards various communities like the El Capotillo District of Dominican Republic and Talaxcoc, Guatemala. Move for H2O is a strong example of how compassionate and committed individuals can create lasting impacts for the communities that need it most.