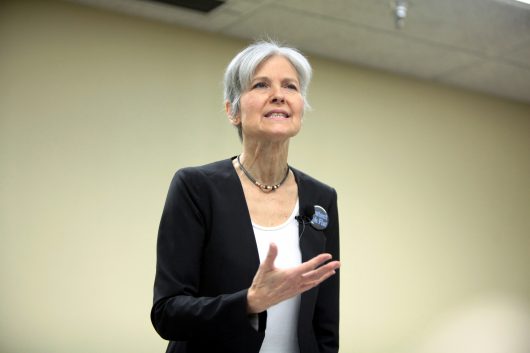 “People ask me ‘what are you going to do about immigration?’ I say we’re going to stop causing it…through wars and NAFTA, the war on drugs, coups and military interventions…We need to connect the dots,” on U.S. policy, free trade, global poverty, and migration, “People are not stupid. They can and will get it when you make the connections,” voiced Stein.

According to research by the Economic Policy Institute, NAFTA led to a loss of jobs in Mexico, particularly in their agricultural sector, consequently increasing the rate of poverty and illegal immigration to the U.S.

The governments of Canada, Mexico and the U.S. negotiated NAFTA in 1994. Arranged by President George H.W. Bush and implemented under Bill Clinton, the deal created a trilateral trade bloc in North America — barriers to trade investment were gradually eliminated, and as a result, tariffs became inapplicable.

Governments sought to integrate and liberalize trade between the North American countries. U.S. officials promised a growing trade surplus with Mexico, creating hundreds of thousands of American jobs. Yet, more than 20 years later, NAFTA has proved to have the opposite effect; studies show it led to a growing trade deficit owing to the growth of U.S. exports which vastly surpassed imports to Mexico.

Since barriers to trade investment were eliminated, U.S. investments in Mexico escalated; corporate executives could easily cut their expenses by moving their factories to Mexico and paying Mexican workers at a much lower wage, fueling a flood of outsourcing.

As a result, the U.S. experienced a heavy loss in jobs. The Economic Policy Institute estimates that, as of 2010, displaced production could have supported 682,900 U.S. jobs, 60.8 percent of those jobs being in manufacturing industries. This also takes into account the additional jobs created by exports to Mexico.

NAFTA also promised Mexico a growing middle class, yet as a struggling third world country, it experienced a harder economic downfall, particularly in its agriculture sector.

Research backs Jill Stein’s claims that, prior to NAFTA being implemented, tariffs were still very high, helping to protect domestic businesses. For Mexico, corn was a crucial commodity that was protected by tariffs.

NAFTA gradually lifted the tariffs in a 14-year transition to an open market. By 2008, the last tariffs on corn were lifted, thus the U.S. was able to flood Mexico with cheap subsidized corn. As a result, 1.3 million jobs in Mexico’s agricultural sector were lost.

The U.S. has sold tons of cheap corn to Mexico for over a decade now, yet corn originated in Mexico and it’s also the predominant food source that most people depend on, especially for making tortillas. Small farmers made a living from the production of corn, a crucial component of the Mexican economy. Now, many feel helpless without a source of income and the rates of extreme rural poverty in Mexico have therefore increased.

This could be explained partly due to the 1995 peso crisis, which was set off by the Mexican Government’s sudden devaluation of the peso against the U.S. dollar. Even so, one expert has argued the crises was caused in part because of NAFTA from the wave of speculative foreign investment in Mexico following the agreement.

By 2010, 53 million Mexicans were living in poverty according to the Monterrey Institute of Technology — half the country’s population. This growth of rural poverty from NAFTA, in turn, led to an increase of migration to the U.S. Indigenous people made up 7 percent of Mexican migrants in 1991-3; in 2006-8, they made up 29 percent.

As president, Jill Stein plans to repeal NAFTA and replace it with trade laws that could better benefit local workers and communities. She is calling for an emergency transition of the economy to 100 percent clean renewable energy by 2030. In doing so, she expects to create 20 million good-wage jobs, that are locally controlled and community oriented, giving Americans greater control of their own economic affairs.

“We are creating a community process, so it’s not just a cookie-cutter from Washington D.C., but rather it’s national support for local control, over creating the jobs, the small businesses, workers cooperatives, that are needed in order to make this clean energy green economy transition,” said Stein.

Climate-Smart Agriculture: Programs and PracticesBeneficial Steps for Education in Ghana
Scroll to top