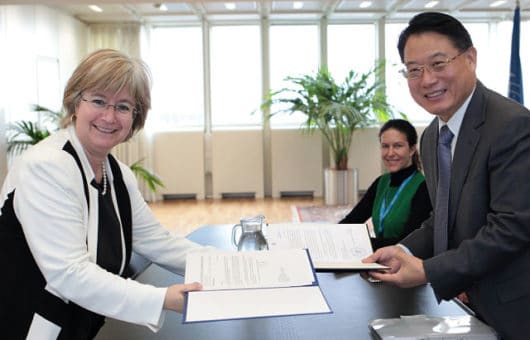 Out of the ashes of World War II rose a small, independent nation situated on the Mediterranean Sea. Since 1948, the nation of Israel has become a great leader in innovation and technology. In just 70 years, Israeli settlers have transformed the country’s desert landscape into lush green gardens by high-tech agricultural methods. With a population just over 8.5 million, Israel has earned the nickname “Start-Up Nation” which rose to popularity in 2009 after Israeli author Dan Senor’s book.

Since 1958, Israel has been committed to providing humanitarian aid through the Foreign Ministry’s Center for International Cooperation and provides more assistance to more than 140 countries. MASHAV helps alleviate hunger, disease and poverty by providing technology and training to places all across the globe including Cambodia, Guatemala, Albania and Ethiopia.

Since 1959, MASHAV has been sending Israeli eye-doctors to countries throughout the developing world to help combat preventable blindness and ocular disease. It has also introduced Israeli drip-irrigation systems to sub-Saharan African countries to aid in providing water to more regions, especially during times of drought. MASHAV has also started a project called Indo-Israel Agriculture Project, which teaches farmers throughout India new agricultural methods.

The Pears Program for Global Innovation

Israel has made it a priority to assist developing countries through entrepreneurial efforts. The country has “the largest number of startups per capita in the world, 1 startup for every 1,400 people.” One example is a company called The Pears Program for Global Innovation, which aids people affected by poverty by supporting Israeli innovators and companies that create technology-based, financially sustainable solutions.

The Pears Program is responsible for several innovations that could have a lasting impact on the world. For example, through its support to the Mosteq company, Israel has found a way to sterilize mosquitos, which could significantly lower, and eventually, end the spread of diseases like malaria. The company, Soapy, has invented smart capsules containing soap and water to facilitate hygiene in countries where sanitation is an issue or there is little access to clean water.

Ideas for the Future

According to Technion International, “Israel has more companies listed on the NASDAQ than Europe, Japan, Korea, India, and China combined.” What is the secret that makes Israel so ingenious and resourceful? “At the heart of this combined impulse is an instinctive understanding that the challenge facing every developed country […] is to become an idea factory, which includes both generating ideas at home and taking advantage of ideas generated elsewhere,” says Senor in his book “Start-Up Nation.”  Furthermore, Israel values education, which helps to foster innovation.

Idea generation has become the backbone of Israeli society. It has allowed the country to thrive in a desert ecosystem, deliver aid to thousands of countries and defend itself from outside attacks. According to the New York Times, “Years of dealing with terrorist attacks, combined with an advanced medical technology sector, have made Israel one of the nimblest countries in disaster relief.” Other humanitarian programs in Israel are continuing efforts outside and inside the country, like Ziv Hospital, which has treated more than 2,000 Syrian refugees who have crossed the border seeking urgent medical attention.

The Israeli Innovation Authority estimates that, over the next decade, there will be a shortage of 10,000 engineers and programmers in the high-tech sector. Although this gap allows for future economic growth, it is a big concern for policymakers. Who will fill these gaps? Will Israel continue to be the Start-Up Nation of the World? Hopefully, Israel’s commitment to entrepreneurship in developing countries will come in handy and create more jobs within the country for migrant workers.