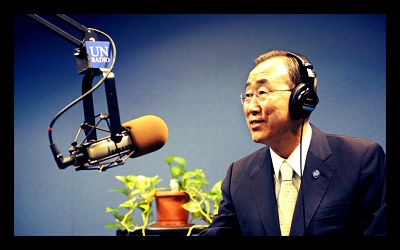 February 13 was World Radio Day. Started in 2011 by the U.N. Educational, Scientific and Cultural Organization (UNESCO), World Radio Day is meant to commemorate the establishment of United Nations Radio in 1946. Since then, there have been unbelievable strides in mass-media and communication. According to UNESCO however, the radio still manages to reach 95 percent of the world, a feat neither television or the internet can claim to have achieved.

But what is it about the radio that has enabled it to be such a helpful tool for developing countries in times of war and general disconnect? Wave frequencies can be produced with the simplest transmitters. The actual radio itself, being portable and in many cases, battery-operated, makes it much more available than television and computers in villages and other rural areas where electrical outlets are hard to come by, let alone a stable flow of electricity.

Secretary-General Ban Ki-moon commended the use of radio “as a channel for life-saving information”. Discussing his life growing up in a Korean village, Ban Ki-moon stresses the importance of the radio for emergency instructions in times of war as well as the main source of information and knowledge for many. Whether it delivers breaking news or issues warnings to those living far from civilization, radios save lives.

UNESCO Director-General Irina Bokova gave a speech on World Radio Day that focused on the wide-spread use of radios not just on a global scale but in smaller communities. Even though the areas the waves reach may not be extensive, it gives the younger generation an opportunity to learn and experiment with technology. Community radio, Bokova says, helps address poverty and social exclusion as well as empowers marginalized rural groups, young people, and women.

As UENSCO optimistically revives the meaning and purpose of the radio, evidence of its pricelessness can be found everywhere. In November of last year, the non-profit THNKR, which is a Youtube channel that showcases people doing amazing things around the world that have the potential to change the way we think and view each others’ and our own potential, posted a video of Kelvin Doe. Kelvin, better known from his radio name as DJ Focus, comes from Sierra Leone. He has become quite famous over the past year for his talent and gift of being a self-taught engineer. By scraping together whatever metals he could, he built his own FM transmitter and generator. With his own radio station, DJ Focus broadcasts music, has an open forum and enjoys entertaining over the radio like any other 16-year-old would, taking full advantage of everything his small radio has to offer.