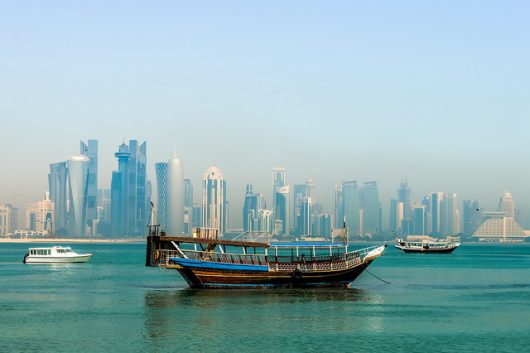 In June 2017, Saudi Arabia, the UAE, Egypt and Bahrain cut diplomatic ties and initiated an economic embargo of Qatar. This was due to reported Qatari state sponsorship of terrorism and of strengthening diplomatic ties between Qatar and Iran. As a part of the economic embargo, the four nations ceased food exports to Qatar, leading to raised concerns about food shortages and hunger in Qatar.

As a desert nation, Qatar relies heavily on food imports, with 80-90% of food supplies being imported. These imports were greatly affected by the embargo. Despite a rise in food aid from Turkey and Iran, Qatar saw a 40% hit to food imports by the end of June. Many people living in Qatar began to stockpile food as food shortages began and food prices rose. While there have been attempts to mediate the situation, the embargo was still ongoing at the end of September 2017 and is expected to continue into 2018.

While the rise in food prices has slowed and food imports have been coming in from different parts of the world, sustainability is still an issue. Qatar has been attempting to develop sustainable ways of providing its own food since before the embargo. In 2008, Qatar established the National Food Security Program (QNFSP) with the goal of increasing domestic food production. This would reduce the amount of food being imported and increase food security, the ability for all people to have economic and physical access to food, ultimately reducing hunger in Qatar.

The QNFSP has sought technological advances in crop production technologies and irrigation systems. One way this is being done is through the Sahara Forest Project, a pilot program using greenhouses on a one-hectare parcel of land outside Doha to grow crops and make fresh water from seawater. The Qatar Islamic Bank also announced in August that it would fund a 530,000 square meter food security facility to manufacture and store rice, raw sugar and edible oils. In addition, several companies are expanding livestock numbers, with one company seeking to add 25,000 cows in order to meet Qatar’s dairy demand by April 2018.

Another attempt to increase food security is being done through food processing. Food processing allows for longer shelf life and less waste. QNFSP is still working to expand this industry.

Finding ways to increase productivity in agriculture is extremely necessary for Qatar, where only one percent of the land is arable. In addition to investing in technology, private enterprises and the Qatar Development Bank will be investing to financially support unproductive farms, which currently make up 80% of registered farmland in Qatar. With the goal of providing 60% of its food through domestic agriculture by 2024, major steps are being taken to increase food security and decrease hunger in Qatar.

What are the Causes of Poverty in Kiribati? How to Help People in Nauru: Aid for Asylum Seekers
Scroll to top