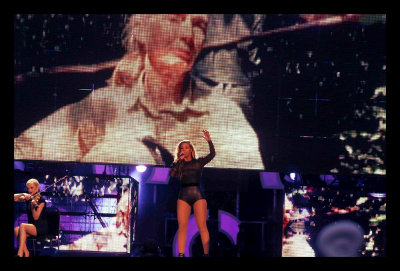 In April, a factory in Bangladesh collapsed, killing over one thousand female seamstresses. The event brought women’s rights to the surface of many discussions. To raise awareness, the women’s empowerment initiative Chime for Change organized an event sponsored by Gucci called Sound of Change Live, focusing on fashion, music, women, and how they can intertwine. The concert featured many women’s rights advocates including Jennifer Lopez, Madonna and Beyonce, to promote women’s rights to education, health, and justice.

About 50,000 fans attended the concert in person, and an estimated one billion more watched online to see how fashion fights for rights. The concert featured an interactive Twitter feed asking viewers’ opinions throughout the performance, which helped the event go viral. Sound of Change Live raised awareness of important women’s issues like domestic violence and education, and was also able to raise $4 million for Chime for Change.

Sometimes the support of celebrities is necessary for action in places like Pakistan, where the voices and opinions of pop icons can grab the attention of the nation’s youth. Ultimately, more good is done once a celebrity advocates for change because more people become aware of and get involved in the world’s most pressing issues.

Beyond the Bugs: How Forests Contribute to Food Security China Wins Influence Through Aid
Scroll to top