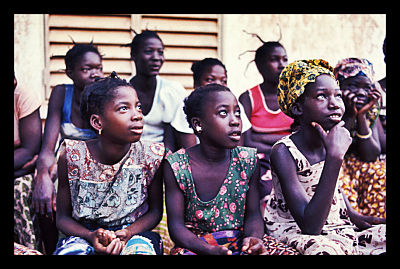 A group of 20 girls from low-income areas of Monrovia, Liberia’s capital city, gather to listen to Divine Anderson. “We are going to help you make a short film about an accountability issue in your community,” she tells them.

“We don’t need to be politicians to push for the kind of country we want; our films can create change,” Anderson assures her audience.

She works for the Accountability Film School set up last year by the Accountability Lab and the girls she’s speaking to are 2014’s first class of pupils. The under-served girls will receive four weeks of instruction on low-budget film making and accountability issues. The girls will also complete self-directed film projects addressing problems of their own choosing.

Accountability Lab terms itself “an independent, non-profit organization that acts as a catalyst to make power-holders responsible in the developing world.” The organization achieves this through a three-prong approach, acting as: a sounding board on issues related to accountability and corruption, an “independent interface” engaging citizens all around the world, and an “operational hub” by supporting innovative accountability tools and communities.

And in the formerly war-torn Liberia, the lab saw much work to be done. Despite having the first female president in Africa, Liberia remains a male-dominated society in which power and resources are often skewed toward men. Its population is largely desperately poor, especially its female population, with soaring rates of illiteracy.

Sexual exploitation is also a huge issue, an issue tackled by Dorcas Pewee in her film “Say It.”

Pewee was one of the first graduates of the Accountability Film School back in the fall. Having lost her family in Liberia’s civil war, she had turned to hustling on the streets of Monrovia to survive. That is, until Anderson found her and brought her to the film school.

In September 2013, Anderson’s film, addressing the pressing issue of sexual exploitation in schools, won viewer’s choice at the first Liberian Film Festival. Pewee followed up her first film with another one on the unfulfilled promises made by Liberian politicians. And she’s found a job- helping Divine lead the current film school class.

On her experiences with the film school, Pewee is empowered. “I saw the light,” she reports.

Other students have addressed issues ranging from the lack of clean drinking water and electricity in cities to the absence of job opportunities for Liberian youth to injustices committed during the civil war.

The films are screened to activists, government employees, university representatives, and civil society members at festivals and are also distributed to local “video clubs” throughout Liberia. They function to create a dialogue about various issues within communities and to work as advocacy tools.

More than 50 students have now graduated from the film school and Anderson aims to train an additional 150 in 2014.

The sustainability of the program and its good work is evidenced by the existence of the Liberia Film Institute recently formed by graduates of the film school. Through the institute, they hope to further hone their skills and earn money through film making grants and contracts with Liberian companies and NGOs.