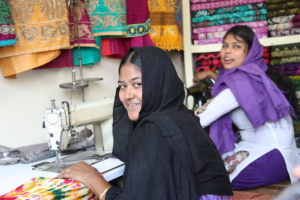 Bangladesh is a South Asian country bordered by India, Burma and Myanmar. The country boasts stunning natural views, including the world’s largest natural sea beach. Over 162 million people call Bangladesh home and share 56,980 square feet of land, making it the eighth-most populous country in the world and one of the most densely populated. Although about 25% of Bangladeshis still live below the poverty line, the country has made remarkable progress in increasing the standard of living for its people. From 1991 to 2017, Bangladesh achieved a decrease in poverty of a little under 30%. This was achieved through marked political stability and sustained economic growth in emerging markets in Bangladesh through the garment/textile, service and ICT sectors.

Bangladesh is the world’s second-largest clothing manufacturer behind China. The garment sector employs about 15% of the total population. It produces roughly 30% of the GDP for the entire country. Since the 60’s, the country has been reaping the economic rewards of this thriving industry. This is seen clearly as Bangladesh currently holds the title for the fastest growing economy in the Asia Pacific region, averaging a 7% growth rate per year. Significant developments in the garment sector, service sector and ICT have led to increased economic prosperity for residents. They have also led to new, emerging markets in Bangladesh and relationships with other countries, including the United States.

New Markets for the U.S.

Additionally, U.S. exports to Bangladesh significantly increased between 2010 and 2011, growing by over half a billion dollars, or 98%. These exports include the raw materials needed to feed the garment sector’s growing appetite. They also include cotton, wheat, petroleum and electrical and mechanical equipment. More Bangladeshis reap the benefits of a secure income and a rapidly improving economy. Consequently, emerging markets in Bangladesh have opened for other countries as well. The Huesges Group is a powerful German business company. It sees this potential and is planning to invest 50 to 70 million euros in Bangladesh, mostly in the tourism, hospitality and ICT sectors.

Some major US companies already doing business in Bangladesh include Boeing, Chevron, ConocoPhillips, Wells Fargo and 3M. Global investment is encouraged and welcomed by the government of Bangladesh. Foreign investments bring billions of dollars and lots of jobs into the economy. This is a mutually beneficial relationship, as new markets of consumers help companies all over the world become more successful.

Furthermore, Bangladesh is continuing to grow and prosper. It has a significant focus on developing new markets in the information and communication technology (ICT) sector. Although it is a relatively new sector, it holds a lot of promise for future economic development. In fact, the current government of Bangladesh has named ICT as an important sector for the continued economic growth of the country. It even plans to invest financially and through programming to support its growth. This makes sense because people in South Asia are using the internet more and more.

In addition, research shows that over the past 18 years, the number of internet users in Bangladesh soared from 0.1 million users to 80 million users. This shows that there are increasingly voracious, emerging markets in Bangladesh for digital products and ICT. The Prime Minister’s office is championing the concept of “Digital Bangladesh.” It aims to have 8.5 million students learning from multimedia content developed by 100,000 teachers. It also aims to provide $28.15 million in earnings for Digital Center Entrepreneurs and perks like Software park, which facilitates high-speed internet connection trade facilities. These along with programs like Digital World, ICT Expo, National Hackathon and Connecting Startups Bangladesh help connect and educate people to the internet. They have provided countless jobs for Bangladeshi youth as well as many opportunity and promise for the future of Bangladesh.