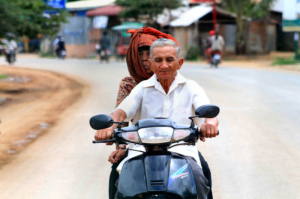 Cambodia has an inadequate social security net with a very limited pension system, only extending to those who worked in the public sector. As such, many elderly people have no financial security and continue working despite health problems, often in labor-intensive jobs.

This problem is also exacerbated by the fact that the elderly literacy rate in Cambodia among people 65 and older stood at only 53.1% as of 2015, impacting the elderly population’s ability to retire reasonably well.

Of note, older persons in Cambodia experienced and survived genocide between 1975 and 1979 at the hands of the Khmer Rouge, and prior to this, the Cambodian civil war in 1970. Research reveals that the genocide led to the deaths of 75% of Cambodia’s educators and 96% of university students. The loss of teachers led to a whole generation of Cambodian children missing out on education. For this reason, today, a large portion of Cambodia’s elderly are illiterate.

The coronavirus pandemic also had an overwhelming impact on elderly poverty in Cambodia. A 2021 study conducted by HelpAge aimed to uncover the impacts of the pandemic on older Cambodians. About 55% of study participants said the pandemic impacted their overall family income, citing reasons such as job losses or reduced earnings of their children and delayed or significantly reduced remittances.

The Aging Population and the Social Security Net

As with many other areas around the world, an aging population comes with disadvantages. For example, “a decline in the working-age population and a surge in health care costs.” Additionally, large numbers of elderly people depend on small numbers of working-age people to fund “higher health costs, pension benefits and other publicly funded programs” through taxes, Investopedia explains.

In July 2022, the Cambodian government launched a social security pension fund for private sector employees, which will work as a future prevention measure for elderly poverty. This follows the attempted implementation of this pension scheme in 2019, which came to a halt due to the COVID-19 pandemic.

In terms of NGOs, Habitat for Humanity Cambodia partners with vulnerable groups, including older persons, to build affordable safe housing with elements “that focus on water and energy efficiency.” Through its efforts, since 2003, Habitat Cambodia “has enabled [more than] 22,000 families to build strength stability and self-reliance through shelter.”

HelpAge is an organization working toward improving the lives of older people across the world. With a specific country office in Cambodia, HelpAge has partnered with Cambodia’s Ministry of Health since 1992. Its projects involve building “age-inclusive and disaster-resilient communities in Cambodia.” Its first activities in Cambodia were associated with “eye care delivery” for elderly people.

With commitment, the government and NGOs can address elderly poverty in Cambodia through improved social security measures, ensuring a better quality of life for older people.