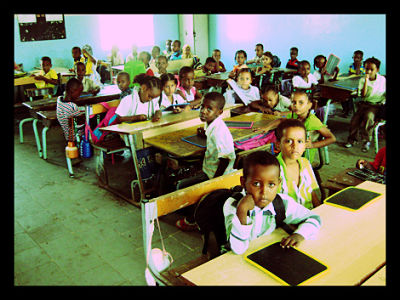 The “End Poverty. Educate Now” campaign will run through the Islamic holy month of Ramadan to raise funds to assist children worldwide by improving their access to primary education. Dubai Cares is currently reaching more than 8 million children in 31 developing countries worldwide. The campaign is building and renovating classrooms, providing clean water wells and latrines, distributing nutritious meals, and providing treatment for intestinal worms. Additionally, teachers are receiving training and millions of books are being distributed.

CEO of Dubai Cares, Tariq Al Gurg, stresses that education is one of the most important investments in breaking the cycle of poverty. Education leads to in increases in income levels and reductions in social inequalities caused by poverty.

Gurg states that this campaign seeks the support of the United Arab Emirates community in order to reduce the number of underprivileged children globally who do not have access to education, which is currently estimated to be 57 million according to UNESCO. UNESCO affirms that education is one of the best tools to combat poverty by stating that if all children in developing countries could read, global poverty rates would fall by at least 12 percent.

Dubai Cares is running this campaign by setting up an interactive stand at the Dubai Mall’s Star Atrium. The campaign is also raising funds through donations via SMS and the Internet. Visitors of the Dubai Mall will be able to make contributions while shopping or through donations boxes throughout the mall. In the atrium, there are black and white posters on tiles which show children living in destitute conditions. These images will gradually transform into a positive colored images as more people donate. These colored images represents the lives of children who are receiving the opportunity for an education.

This symbolic transformation represents the dramatic change that education can make in the lives of children and the fight against poverty.