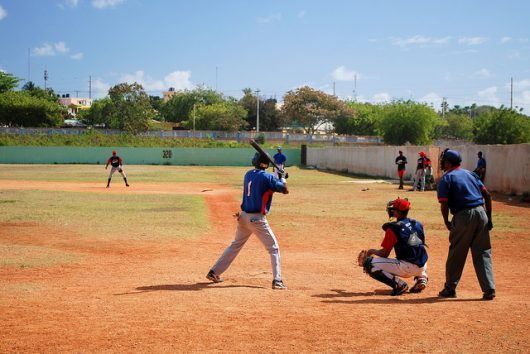 American baseball has become increasingly diverse and filled with players not originally from the United States. Major and minor league recruiters set up sophisticated training facilities, or ‘academias,’ throughout Latin America, including the Dominican Republic, aiming to streamline talented students to successful careers in U.S. baseball. The academias function as motivation and preparation for Hispanic youth to bring themselves and their families out of poverty. Since 4 out of 10 are impoverished in the Dominican Republic, baseball is seen as a ticket out. There are many benefits that come from baseball recruitment in the Dominican Republic.

Baseball in the Dominican Republic

It is estimated that Dominican players earn roughly $400 million each year from playing baseball, some of which is sent back to the Dominican Republican and reinvested in their economy. This sum makes up a small part of the true financial impact of baseball in the Dominican Republic, as the training academias draw in thousands of aspiring youths — not just Dominicans, but also those from neighboring countries such as Venezuela, Nicaragua, Panama, Mexico and Cuba. These facilities must be staffed with trainers and equipment, and baseball is estimated to spur the Dominican economy by $1 billion a year.

Baseball also plays a socially positive role for Dominicans. Dominican baseball recruitment bonds families and friends towards a common goal, and keeps youth out of troubling activities that could derail futures. Major league players functions as heroes and inspiration—showing those who come from nothing that success is possible. Those who grow up impoverished can make it to the MLB, amass a fortune, and spread the wealth back to their home country.

A downside frequently exists when this type of cultural transplant occurs. On average, only 2 percent of those who enter academias ever make it to the major leagues. Another major issue is the use of performance enhancing drugs on youth to make them more competitive to recruiters — handlers, or agents, stand to benefit from their prodigies’ prowess and success.

Since players’ signing bonuses range anywhere from $10,000 to over $3 million, with handlers receiving 10 percent – 50 percent of this amount, it’s logical that Dominican players make up 38 percent out of those who test positive for these drugs. In addition, few legal boundaries are in place for how players are handled prior to handling, and often result in vast amounts of corruption among agents.

Back to One’s Roots

Despite these problems, the success of baseball recruitment in the Dominican Republic remains strong. Nelson Cruz, the Seattle Mariners cleanup hitter, is an exemplary illustration of a Dominican player that gives back in meaningful ways.

Living the good life as an impressive MLB player, he has not forgotten the reality of life for many back home in the Dominican Republic. His family ingrained in him a commitment to doing the right thing, and after his old neighbors and lifelong friends in Las Matas de Santa Cruz lost their home in a fire, he arranged to have a firetruck sent back to his hometown.

“In my community, we didn’t have a firetruck,” Cruz said. “We also needed an ambulance because we don’t have the biggest hospital. When somebody gets sick, or accidents or heart attacks, any emergency, we had to transport those people in trucks or SUVs, nothing that can give you the medical attention you need.”  In the U.S., we take things like emergency medical response for granted, but this is often not the case in many Latin American countries. Cruz’s donation has reportedly helped save many lives and changed the landscape of his home country.

Cruz has also arranged a scholarship program to help combat some of the issues with baseball recruitment. Oftentimes, recruits leave school and sign a three-year contract but never make it to the big leagues, leaving them with nothing and no education. Cruz helped create a scholarship program to help these youth obtain an online diploma in an attempt to ease the transition for Hispanic youth whose baseball dreams fail to take them to full athletic success.

This story of one of many Hispanic players giving back to their home countries facing extreme poverty demonstrates the positive cycle spurred by baseball recruitment in Latin America. This sport helps bring underdeveloped countries out of extreme poverty and can act as a beacon of hope for Hispanic youth.