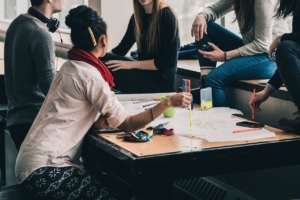 Hunger is a prevalent issue that impacts children, families and individuals in countries across the globe. Despite the major scale of this issue, determined individuals can play major roles in providing food security to thousands. Sharing their ideas and resources on how to reduce hunger around the world, here are four activists fighting global poverty.

Malala Yousafzai is a Pakistani education activist. The Taliban shot her in the head in 2012 for publicly advocating an end to gender discrimination in education. Since then, she has become a U.N. Messenger of Peace, a Nobel Peace Prize winner and the co-founder of the Malala Fund. Oftentimes, those in poverty cannot receive quality education which also limits social mobility. The Malala Fund is addressing world poverty by providing education to millions of girls. This organization created the Education Champion Network, which helps provide education to girls in Afghanistan, Brazil, India, Lebanon, Nigeria, Pakistan and Turkey. The Malala Fund has partnered with Apple Inc. and the Bill and Melinda Gates Foundation, as well as individuals such as Angelina Jolie, to help support the 130 million girls being denied an education around the world.

Ernesto Sirolli is a leading activist on economic development for those in poverty. Born in Italy, Sirolli worked for an Italian NGO in Zambia. This NGO taught Zambian communities how to grow Italian vegetables. There was resistance to the NGO’s efforts and, as a result, the organization paid wages to the Zambian communities working with them. Before the communities could harvest the vegetables, Sirolli witnessed a group of hippos rise out of the river and devour their new agriculture. Only then did he understand the true threat of local resistance.

From this experience, Sirolli discovered the issues that arise from what he calls “dead aid” from many Western countries. He questioned whether the more than $2 trillion from Western countries dedicated to developing communities was being used in a non-patronizing way. He noticed that NGOs rarely worked with local entrepreneurs on an individual level.

Sirolli developed a philosophy of economic aid for those in poverty in which the primary principle is respect. He created the Sirolli Institute International Enterprise Facilitation Inc., a network that gives local entrepreneurs an opportunity to develop their own ideas and benefit their own communities. Sirolli offers local people privacy, confidentiality, dedicated service and other essential components of entrepreneurship.

Louise Fresco is a Dutch researcher and activist who advocates for smart agriculture as the key to fighting world hunger. In 2000, she became the assistant-director general of the United Nations Food and Agriculture Organization (FAO) in Rome and brought her ideas to an international scale. Fresco uses the evolution of bread as a metaphor to explain food’s role in the development of modern society.

Over time, bread has evolved from a staple to a cheap contributor to obesity. Additionally, Fresco discusses the large-scale production that has resulted in the mass destruction of landscapes. This negative association, combined with the negative environmental impacts of mass production, has created a counter-culture where people prefer to buy bread made from small-scale sellers. However, Fresco argues, buying from small-scale producers is a luxury solution for those who can afford it. People in poverty simply benefit from diverse, low-cost and safe bread.

Cheap bread symbolizes that food has become increasingly affordable. The human race currently has more available food than ever before, which allows people to focus on other activities. Humans have not had the luxury of ample food production until now when it has become so cheap compared to previous years. Fresco believes that to solve world hunger, countries must increase food production with subtle mechanization to avoid large-scale environmental destruction.

Along with her husband Bill, Melinda Gates is the co-founder of the world’s largest private charitable organization. The Bill and Melinda Gates Foundation has a $40 billion trust endowment that helps solve issues including global health, global development, global policy and global growth or opportunity.

Melinda Gates has used her position to focus on empowering women around the world. Specifically, Gates concentrates on family planning, maternal well-being and child health. She has spread awareness about “time poverty,” which is the idea that many women perform hours of unpaid work that can deprive them of their potential.

Each of these activists fighting world poverty is taking a different approach to eradicating global hunger. However, the culmination of these efforts is making a major impact around the world, one person at a time.