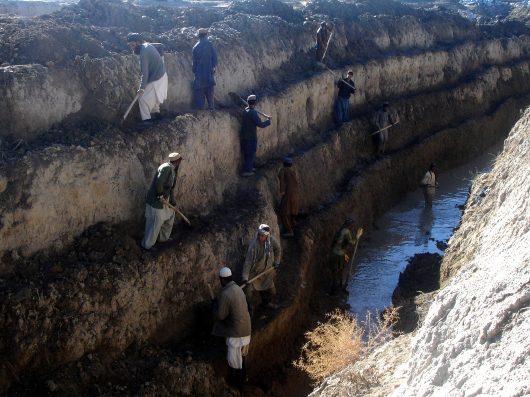 Despite an influx of international aid, 39 percent of Afghans live in poverty, and this number is increasing. A shocking 1.3 million more people are poor in Afghanistan today than in 2012. Why is Afghanistan poor? The country has experienced conflict since the Soviet Union invaded in 1979. Political transitions within the country also cause insecurity. Most households in Afghanistan are not established enough to cope with economic shocks or natural disasters. About 20 percent of Afghans live just above the poverty line and slight economic shocks could drive them into poverty.

One answer to the question ‘why is Afghanistan poor?’ is that the economy is too small for the growing labor force. Many workers are illiterate and looking for low skilled jobs, but there are not enough of these types of jobs. In 2016, Afghanistan’s GDP growth was 1.2 percent. While this was an increase, it is not enough to bring workers out of unemployment. Economists estimate that GDP growth needs to be eight percent to successfully employ the Afghan work force. Unfortunately, continuing conflict and insecurity within the country makes this growth unlikely.

Rural Afghanistan is poor due to its dependence on agriculture and informal labor markets. Low investments and natural disasters have hurt the agriculture market that most Afghans depend on for employment. Natural resources necessary for successful agriculture are lacking in Afghanistan. Compared to its population, there is little farmable land. Precipitation is scarce and there is insufficient irrigation infrastructure. In addition, the country has faced multiple debilitating droughts since 1999.

In rural areas, small-scale farmers and herders, landless people and women who are heads of households bear the largest burden of poverty. Women in Afghanistan face increased inequalities because they have less access to education and health services. A lack of skills or a medical condition can keep women out of the workforce. Widows account for a large population of the poor in Afghanistan. Due to fighting within the country, there may be over one million widows in Afghanistan. Most of these women have children to support. Unfortunately, the patriarchal society excludes them from many social and employment opportunities, so most become beggars.

Many countries and organizations have poured aid into the country. However, it does not seem to be helping. The inequality between the rich and poor in the country is increasing. Much of the aid went to build schools and hospitals, increase public services and repair infrastructure. While these human services are important, the agriculture sector continues to struggle, and rural households don’t have protection from economic shocks. In addition, the government did not always distribute funds fairly throughout the country.

Why is Afghanistan poor? Afghanistan is poor due to continuing shocks to the country, and it is necessary to build programs to insulate households from economic instability.