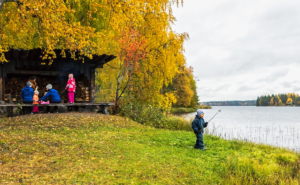 With children now better at identifying their following on social media than common plant and wildlife species, there is increasing concern that they are losing touch with their natural environment. In fact, these worries were affirmed in a 2016 longitudinal study by Natural England which found that more than one in every nine children today had never been to a park, forest or other natural environments over the course of the previous year. Children from low-income families are also less likely than their peers from high-income households to frequent urban or rural wild places due to lack of access and training in these spaces. Making nature accessible to all will help alleiviate global poverty.

When so many people live in poverty, it is especially important to care and be aware of the environment around us. The lack of knowledge about a degraded environment in nations, which rely on their natural resources for economic prosperity, actually exacerbates poverty conditions.

Furthermore, it is the poorest people from the poorest nations that are most affected by environmental degradation when they contribute the least to environmental pollution. Individuals from developing countries have to make a living from marginal lands, forests and coastal waters. This exposes them to critical levels of air and water pollution. Despite 96 percent of urban dwellers having access to improved drinking water sources, the bacteriological quality of water in urban populations are poor and cause over 4 percent of deaths around the world.

Nevertheless, while the world’s poor suffer the most from bad environmental management, the environment will affect the pace and pattern of overall international economic growth. Despite the equal importance of the environment to all, it is often the fact that the poor, who rely most heavily on natural resources, also have the least capacity to influence political processes and decision-making. Women, in particular, suffer from weak and insecure rights of access to the resources they depend on.

However, many community efforts in developing nations that aim to alleviate poverty and increase proper environmental management prove to be successful. For instance, in the Nam Pheng village of Laos, villagers communally join to expand markets for edible bitter bamboo and cardamom, two high-value traditional products. Through sustainable environmental management, villagers were able to increase sales and obtain higher prices. Similarly, the World Resources Institute reported that in Madagascar, a shrimp processing company established in a remote part of the Island created 1,200 permanent jobs for rural people, many of whom had never had a paid job.

Poverty reduction, economic growth and access to nature are all closely linked. With aid flows growing in recent years, it is important to include the environment in creating development initiatives. Such initiatives can include the improvement of modern energy sources for the poor and the reformation of policies to help improve forestry, fishery as well as water and sanitation systems.

The issue of access to nature to the future generation is imminent, particularly with the level of disengagement that is seen between children and the natural world today. This disengagement is reflective of a larger, broader issue, a disconnection with nature. Making nature accessible needs to be addressed in order to create a future generation that focuses on the importance of the natural world and uses pre-existing natural resources to end poverty.

10 Facts About Corruption in AfghanistanE-Commerce Markets in Africa: A Mobile Economy
Scroll to top