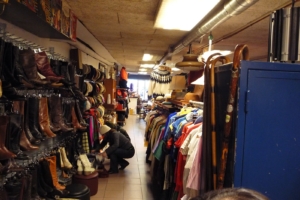 Social impact businesses prioritize doing business in a way that actively helps a local or global cause. Over the past few decades, the social impact sector has grown considerably. A perfect example of such an organization is Humana, a Spanish-based second-hand vintage clothing store chain. It recycles used clothing in its shops and then uses the profits from the shops to support community cooperation projects in Spain, Africa, Asia and Central and South America. That is why this non-governmental organization is the perfect blend of fighting for environmental protection and participating in domestic and international humanitarian aid.

In 1987, the international Foundation Humana People to People brought the Humana vintage store concept to Spain. There are 44 Humana stores in Spain and many more Humana branches throughout the world. The organization collects used clothing in collection bins in cities in Europe and North America where it is sorted and assessed in dedicated sorting centers and then sold in its vintage stores. Humana also sends some of the clothing to Belize and six countries in Africa to further sort, assess and then sell it. Humana works with municipal leaders for the collection and sorting process. By reusing and recycling unwanted clothing, Humana positively impacts the environment. In Spain alone in 2019, the organization collected almost 18 million tons of clothing and footwear.

Humana stores may look like any average second-hand retail outlets, but they operate chiefly to make a significant social impact. In fact, Humana aligns with the United Nations 2030 Agenda and offers its support to countries that aim to achieve the U.N. Sustainable Development Goals (SDGs).  In Spain, Humana’s income per year is above 25 million euros, generated essentially by the sale of clothing. It distributes its profits to development cooperation projects, environment protection programs, social assistance projects, education and awareness projects and support for clothing collection and social farming in Spain and in Asia, Central and South America and Africa. Importantly, regardless of the social projects, the Humana stores in Belize and the six African countries that continue to sort and assess clothes offer the locals a sense of dignity by offering them the luxury of choice in the realm of fashion, at very affordable prices.

Humana People to People, the parent organization, operates across five continents and in 45 countries. It has supported more than 9.6 people and invested in more than 1,238 project units.

From 2014 to 2016, Humana conducted a sustainability study of its collection and sorting facilities in Germany to assess their ecological impact. Although the facilities consumed 6,148 cubic meters of water for the entire process chain, they saved 75 million cubic meters of water needed to produce new clothes. The same applies to their CO2 emissions. The process chain generated 5,253 tonnes of CO2, but their activities prevented the production of more than 112,892 tonnes of CO2. Consequently, this eased the strain on the environment by a total of 107,639 tonnes of CO2.

On top of that, these Humana facilities attempted to use as much renewable energy as possible throughout their process chain, which makes a considerable difference. Since only 21,000 MWh of energy was used compared to the potential 602,000 MWh that would have been used on producing new clothing, the company saved approximately 581,000 MWh in 2016 alone in its German collection and sorting centers.

Finally, although the sustainability report only represented a fraction of the entire Humana franchise, it gives an idea of the Humana People to People business model scope in terms of benefitting people throughout the world and the planet itself.