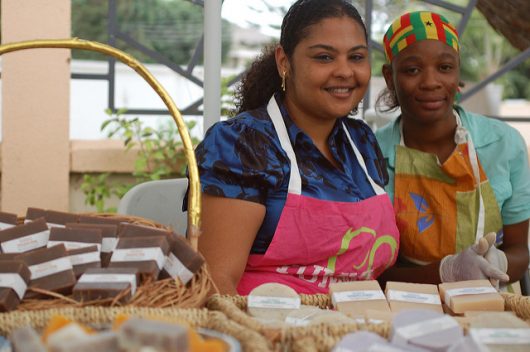 As brands in the U.S. continue to see the importance of fair trade and ethically-conscious practices in business, many have also developed philanthropic initiatives. SheaMoisture’s philanthropic efforts in Africa have helped thousands of economically disadvantaged women and children gain resources to educational and entrepreneurial resources.

The hair and skin care brand was established under Sundial Brands, which was founded by Richelieu Dennis in 1991. Since then, SheaMoisture acquired an estimated $300 million in revenue before it was sold to Unilever in 2017.

Nations that have benefitted from SheaMoisture’s philanthropic efforts in Africa include Ghana and Liberia. In these two countries, women face cultural oppression in the areas of education and entrepreneurship.

In a report published by the U.N., it was stated that women in Ghana are more vulnerable to poverty than men due to gender discrimination and increasingly difficult access to productive resources. This has also led to women facing greater challenges with obtaining a post-primary education.

Women in Liberia face economic challenges due to a poor governance structure and low private sector capacity that has resulted in a weak business environment within the nation. Furthermore, Liberia’s labor force lacks many skilled and literate people, which has resulted in lingering business corruption.

Over the years, SheaMoisture’s philanthropic efforts in Africa have included initiatives such as Community Commerce, the Girls Entrepreneurship and Technology (GET) Program and the Sofi Tucker Foundation.

SheaMoisture established a special line of products under their Community Commerce initiative, where 10 percent of sales support women in Ghana, among other nations. This venture has been a success because it has brought economic opportunities to women threatened by poverty and educational disadvantages.

The GET Program for Students

Another initiative SheaMoisture has established is the GET Program, which was established in partnership with SMART Liberia. The program provides women between the ages of 18 to 35 the opportunities to start their own businesses by giving them resources like training and business investments.

In its inaugural year in 2016, the program selected 50 young women in Liberia to participate, several of whom have gone on to start and manage their own businesses.

Another philanthropic initiative established by the company is the Sofi Tucker Foundation, which was named after the woman who inspired the SheaMoisture brand.

The organization has awarded other non-profits with grants up to $25,000 to continue philanthropy work. One organization that has benefitted from these efforts is Todee Mission School in Liberia, which provides quality educational resources to children from first grade to ninth grade from 140 villages in rural Liberia.

As of now, thousands of people initially threatened by poverty have been able to establish stronger financial and educational platforms for their futures. This is due to SheaMoisture’s philanthropic efforts in Africa and the ongoing efforts brands have made over the years to combat poverty in nations with fragile economies.