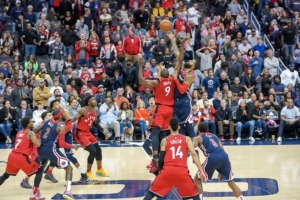 Before he was competing on the court and playing alongside NBA superstars such as Russell Westbrook and Kevin Durant, Serge Ibaka was a child facing many adversities. Both of Ibaka’s parents played basketball in Brazzaville, the capital of the Republic of the Congo, during the late 1990s. It was at this time that the Congo was going through a civil war.

During the summer of 2009, Ibaka began his career as a professional basketball player in the NBA with the Oklahoma City Thunder. After achieving the status of a professional athlete, Ibaka’s dream began to shift. He decided to use his platform as an athlete in a way that goes beyond just playing a sport and impacts the lives of others. Specifically, having once lived during the war in the Republic of the Congo, he now assists children within the community and does so through the Serge Ibaka Foundation.

The Serge Ibaka Foundation and its Mission

Education remains out of reach for millions of children between the ages of five and 17 in the Republic of the Congo. This is caused by a large economic disparity between parents who can afford for their children to attend school and those who cannot. Receiving an education is critical for the future of these children, yet factors such as child labor, child marriage and pregnancy all stand in the way of children being able to reach a brighter future. Living in the Republic of the Congo during a war, Ibaka faced similar feelings of hopelessness. However, he was able to achieve his dreams, and through his foundation, he wants to help other children in the community to do the same.

Partnering with other organizations, the Serge Ibaka Foundation strives to improve the living conditions of Congolese children and promotes the importance of receiving an education. Ibaka aims to use his story as inspiration to ultimately demonstrate to children that anything is possible with determination and hard work. Rather than solely using his fortune to help the country from afar, Ibaka makes frequent visits back to the Republic of the Congo to interact and share his story with children.

Context and Aid for the Congo’s Situation

Outbreaks of cholera, Ebola and measles continuously claim the lives of civilians in the Democratic Republic of the Congo. This left the country struggling even more when the COVID-19 pandemic hit. With more than three-fourths of the country living in poverty, various statistics suggest a difficult reality. For example, the Congo ranks highly globally for stunting, which is a reflection of poor nutritional health for children. The pandemic only made matters worse as the country struggled to keep up with the health care of civilians. Many parents also struggled to provide meals for their families.

In May of 2020, the Serge Ibaka Foundation fired up a COVID-19 relief program to provide aid for those affected economically by the pandemic in Brazzaville. The foundation, along with the help of the BUROTOP Iris Foundation, has distributed 80 tons of food to 8,000 families who live in Brazzaville.

Ibaka also expands his desire to achieve change internationally to other nations. There are more than 9,000 people living without homes on the streets of Toronto, Canada, and shelters within the area have been at capacity for many years. The COVID-19 pandemic has not helped the situation of homelessness; instead, it has highlighted the struggles that the homeless endure in this city. In 2020, Serge Ibaka pledged to match up to $100,000 of donations to the Fred Victor COVID-19 Emergency Fund in its attempt to improve the health and safety of those experiencing poverty and homelessness in Toronto.

NBPA and its Accomplishments

Serge Ibaka is not the only NBA player committed to ensuring those who are less fortunate are recognized. Players in and around the NBA devote their time and effort through charities of their own, and Ibaka has worked alongside others to provide these players and their organizations with support through the NBPA. Through this foundation, Ibaka works to help not only those in his hometown but anyone around the world who may also need inspiration or a change in lifestyle.

The NBPA is a foundation that aims to highlight the collaborative work that players of the NBA conduct worldwide to create positive change. The foundation’s main mission is to provide funding and support for the charities of the many professional basketball players who dedicate time and resources to communities around the world. Ibaka serves as one of the directors on the foundation’s board. Notably:

Serge Ibaka is also a UNICEF Ambassador in the Congo and has dedicated his time to organizing a plan that involves renovating an all-boys orphanage and an all-girls orphanage by providing the two with educational and health care supplies. He has also collaborated with the Starkey Hearing Foundation and worked to provide hearing aids to children in Brazzaville. Ibaka serves as a role model in his work and in his actions, particularly throughout his professional career as a basketball player. Never forgetting his roots of a childhood in poverty, he has vowed to inspire the children of his hometown and assist them with the necessary living conditions to one day soar down the court to a better life, just as he has.

Education in Kenya is a Path Out of Poverty Care4Calais Aids Refugees in Calais, France
Scroll to top